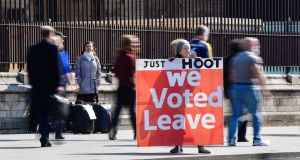 A Brexit supporter outside the Houses of Parliament in Westminster: An Oireachtas committee warns that talks on trade after Brexit will be “long and complicated”. Photograph: Rebecca Brown/PA

Talks on a trade agreement between the EU and the UK after Brexit will be “long and complicated” and will “require difficult decisions to be made on both sides”, a report by an Oireachtas committee has warned.

The progress report, compiled by the Seanad Brexit committee and due to be published later this week, says there is “very little time to negotiate” a trade deal if the UK does not seek an extension to the transition period after it leaves the EU, due to end next December.

EU leaders acknowledged at a summit in Brussels last week that the UK would likely leave the EU in January but most did not believe a trade agreement could be agreed before the transition period ends, raising the prospect of another “cliff edge” in 12 months’ time.

The committee’s report says the negotiations will be “unprecedented”.

“We must also remember that this is only the beginning. Once the UK has left, negotiations will start on free trade agreement or something similar. These talks are likely to be long and complicated, continuing well beyond the end of 2020, and will require difficult decisions to be made on both sides,” the Senators say.

“While the political declaration has outlined a joint commitment to developing a ‘ambitious, wide-ranging and balanced economic partnership’, negotiations on international free trade agreements are typically long and complicated.

“The EU negotiating a free trade agreement with a departed member state is unprecedented, so it is difficult to predict with any level of certainty the potential timeframe.”

The committee recommends that a flexible approach be taken in relation to the transition phase.

“If the UK leaves the EU on January 31st, 2020, with the draft withdrawal agreement in place, and does not seek an extension to the transition period, this leaves very little time to negotiate and agree a sufficiently comprehensive free trade agreement that secures all parties’ interests. It is the opinion of the committee that flexibility should be considered in this circumstance.”

The committee is chaired by Senator Neale Richmond (Fine Gael), who says in a foreword to the report that while some sectors are well-advanced in Brexit preparedness and contingency planning, others have still not been given the assurances and clarity they require.

“In the absence of certainty on the final outcome of Brexit, it is important for us to focus on mitigating potential challenges, while also looking to secure the best possible future relationship with the UK,” he wrote.

The committee also calls for the Belfast Agreement to be “protected and upheld in all its parts” and for clarification on concerns raised by stakeholders in relation to rights for people in Northern Ireland “as a matter of urgency”.

Meanwhile, Minister for Agriculture Michael Creed has said that concluding a trade agreement within 12 months is “wildly beyond credibility”.

He said the UK needed to clarify by the end of June if it wanted an extension to the transition period.

Speaking on RTÉ’s The Week in Politics, Mr Creed said it was not just Ireland but 27 member states who would be seeking to have their interests protected in the next round of negotiations.