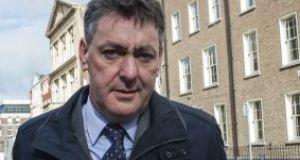 RTÉ Europe Editor Tony Connelly has accepted an apology from Fianna Fáil MEP Billy Kelleher after the politician suggested the broadcaster’s licence fee should be cut over its “pitiful” coverage of EU affairs.

Mr Kelleher’s attack, made on Twitter on Wednesday ahead of MEPs in Brussels overwhelmingly endorsing the Brexit withdrawal agreement which allows the UK to leave the EU on Friday, provoked a widespread backlash online.

Fianna Fáil leader Michael Martin distanced himself from the comments and heaped praise on Mr Connelly, who has been internationally recognised for his reporting and analysis on Brexit.

In his tweet, Mr Kelleher said he met Mr Connolly in the European Parliament and “exchanged polite words about the hugely significant vote that was happening later”.

The MEP went on to claim RTÉ is “pitiful on EU matters of public interest” and suggested “a reduction” in the €160 licence fee.

Mr Kelleher, a former Fianna Fáil TD who is now MEP for Ireland South, later clarified that he was not singling out Connelly for criticism but that his comments “refer to the the fact that people continually raise with me the lack of information about Europe”, again referring to RTÉ’s coverage of European affairs.

Asked about the attack during a general election campaign walkabout on Thursday, Mr Martin said both RTÉ and Mr Connelly had “performed superbly” in their coverage.

Mr Connelly later tweeted that Mr Kelleher had phoned him on Thursday to offer “a gracious apology” and to insist that his tweet was not directed at him personally but was “a result of sadness over Brexit coming to pass”.

Mr Kelleher told him there was “frustration” among his constituents that the EU is “not properly explained and explored by the Irish media” and that as “he would see it, in the absence of healthy and fair coverage of the EU, the eurosceptics will always win”.

Mr Connelly added: “I have fully and gratefully accepted Billy’s apology and explanation and am happy to draw a line under the episode.”