Remember Brexit? It’s back and, yes, there’s another impasse 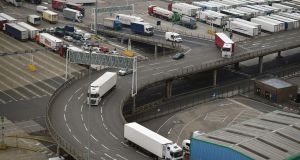 So Brexit is back in the news?
Yes. The UK left the EU at the end of last year – so Brexit happened – but negotiations are now under way to try to agree the shape of its future relationship with the EU, particularly on trade. Because the UK entered a transition period after it left the EU not much has actually changed since then, but this is due to run out at the end of the year. The UK said formally on Friday that it would not seek an extension to the transition period – if this was to happen it had to be agreed by the end of June.

But there are a few months left for talks still?
There are. But the talks so far have made little progress, need to quickly get a new impetus if there is to be any chance of reaching a deal by the end of the year. There is to be an online conference between UK prime minister Boris Johnson and EU leaders on Monday, followed by intensified talks from the end of June. Trade deals are complicated and the EU side will need time to ratify any deal, so we could be heading for a period of drama in the autumn to try to finalise an agreement.

What if there is no deal?
If there is no deal then the UK leaves the EU trading bloc at the turn of the year. Trade would continue on what are called World Trade Organisation terms, meaning tariffs, which are special import levies, on trade between the EU and UK and a host of new customs procedures and delays. Some of these might apply anyway even if there was a deal, but a no-deal exit from the trading bloc would be more damaging. This would be like the no-deal Brexit we were threatened with at the end of last year, with a big impact on the Irish economy.

The UK has said it will give some leeway to goods entering from the EU by not imposing full checks or requiring immediate tariff payments until July of 2021.

What about the Irish Border?
This is where a departure without a trade deal would be different from the no-deal Brexit feared last year. Under a special protocol agreed as part of the withdrawal agreement, the UK signed up to a new trading arrangement for Northern Ireland designed to avoid the need for Irish border checks and infrastructure, even if no trade deal is completed by the end of this year.

How this will work is being agreed by a special committee, and here too there are difficulties. Minister of State for European Affairs Helen McEntee said in the Dáil recently that a recent paper from the UK, while it did provide some clarification, still left a lot of uncertainty in areas like customs, tariffs and VAT checks. Under the agreement, Northern Ireland will continue to follow EU single market rules for goods and will make the necessary checks on goods, food and animals entering the North from Britain. The EU is insisting these checks are full and detailed as there will be no further controls at the Irish Border when they enter the EU single market.

What are the implications for Irish business if there is no trade deal concluded?
It would be a hit for Irish exporters to the UK, particularly the food sector with McEntee estimating this week that tariffs of €1.35 billion would be imposed on annual Irish food exports to the UK, which are valued at around €5.2 billion. The beef sector, which would face the highest tariffs, would be most exposed and this would feed back to jobs in the Republic, cattle prices and farm incomes. All goods exporters and importers trading with the UK would face costly new procedures and potential delays. New tariffs on imports from the UK would push up supermarket prices, likely to cost shoppers more than €1,000 a year on average, according to an ESRI study. Given the economic uncertainties of surrounding coronavirus, a UK exit without a trade deal at the end of this year would threaten a double whammy to the Irish economy and particularly to rural Ireland.

What are the sticking points in the talks?
The key issue is the terms on which the UK would be given access to the EU’s single market and what price it would pay in terms of aligning with EU rules and regulations. The EU side argues that as it has left the EU, the UK can no longer have the same access as it did, and must sign up to what are called level playing field provisions – sticking by EU rules in areas such as labour rules, state aid to businesses and the environment – if it wants to do so. The UK says the EU is making unreasonable demands. Specific issues such as fisheries, which were due to be concluded by July 1st, complicate matters further. As was said many times last year, the clock is ticking.