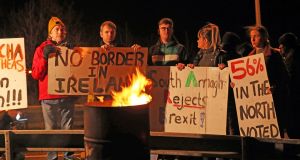 Protesters from the campaign group Border Communities Against Brexit take part in a demonstration in Carrickarnon on the Irish border ahead of the UK’s departure from EU. Photograph: Niall Carson/PA Wire.

Protesters gathered on the Border on Friday night ahead of the UK’s departure from the EU to show their opposition to Brexit.

Demonstrations organised by the lobby group Border Communities Against Brexit (BCAB) were held at six locations along from Carrickarnon in Co Louth to Bridgend in Co Donegal.

A spokesman for the group said Northern Ireland was being “dragged out of the European Union against its will” and that “many threats and serious challenges” remained in regard to citizens’ rights post-Brexit.

In Bridgend, on the Donegal/Derry Border, several hundred people, some carrying home-made placards, gathered in protest.

Dermot O’Hara from BCAB said it was a “bad day” for people on the Border and called on the Irish Government and North Ireland’s politicians to support their call to ensure the rights of EU citizens are protected after Brexit.

Sinn Féin’s Martina Anderson told those present that she addressed them as “a very proud MEP for another hour”.

There was, she said, “a democratically endorsed pathway back into the EU”.

“A United Ireland is the solution to both partition and this Brexit mess,” she said.

Pro-Brexit campaigners held a flag-waving celebration at the gates of Northern Ireland’s Parliament Buildings in Stormont at 11pm, the moment the UK left the EU.

DUP’s Brexit spokesman Sammy Wilson said the UK would “break free from the EU prison” which he described as “the dank dungeon which has bound our economy, stunted our growth and restricted our economic freedom”.

He called on British prime minister Boris Johnson to “flex his muscles” in future negotiations with the EU.

“If the prime minister and the government do not robustly oppose the EU in these future negotiations then Brexit will not be done,” he said ahead of 11pm.

His party colleague, Jeffrey Donaldson MP, told the BBC he recognised there were divided opinions over Brexit, and “we must now look to the future and work toghether and heal our nation. Let’s focus on the opportunities that are out there.”

SDLP leader Colum Eastwood said the “fight to defend the interests of people in the North is not over”. He said Brexit was “an act of constitutional violence inflicted on the people of Northern Ireland and Scotland by an English electorate.

“The first phase of Brexit will finish at 11pm tonight but the battle to secure trading arrangements which provide businesses here with ambidextrous market access begins in earnest,” he said.

Business leaders in Northern Ireland expressed concern that there was only a short window of 11 months to conclude trade negotiations, with many issues to be resolved.

“A pragmatic approach is needed by all parties to ensure the NI protocol is workable from next January,” said Aodhán Connolly, director of the Northern Ireland Retail Consortium.

Roger Pollen from the Federation of Small Businesses said Northern Ireland must not squander an opportunity “to position itself as one of the best locations from which to do business, with ready access to both the EU and UK markets”.

The British Medical Association said it had outstanding concerns around the cross-border provision of health services and the supply of vital medicines after Brexit.