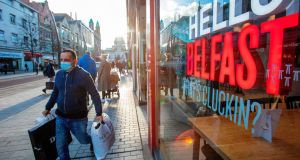 A shopper wears a protective face covering in Belfast city centre on Christmas Eve, on the day a post-Brexit deal was struck between and UK and EU. Photograph: Paul Faith/AFP/Getty

Business leaders have welcomed the EU-UK Brexit deal agreed on Christmas Eve, while highlighting the new barriers to business that will be imposed as a result of exiting the European Union.

The director general of the British Irish Chamber of Commerce, John McGrane, said businesses in Ireland and across the UK now could “breathe a collective sigh of relief”.

“The new trade agreement will help to protect nearly €90 billion in trade across the Irish Sea and sustain 400,000 jobs on these islands,” he said.

Mr McGrane added, however, that while the agreement protected the free trade of goods, businesses were still confronted with increased costs, delays and disruption in sectors such as financial services.

“This will add new costs to businesses at a time when they are looking to recover from the ever-growing impacts of Covid-19,” he said.

“It is also clear that many businesses need more time to adapt to this new regime, and so reasonable grace periods for implementation are now necessary. In any event, new customs and regulatory requirements leading to possible delays will mean businesses will need help.”

Aodhan Connolly, director of the Northern Ireland Retail Consortium, hoped the deal would “protect consumers across the UK from billions in import tariffs on everyday goods”.

“For Northern Ireland it also means a reduction in new customs frictions between GB and NI,” he said.

Mr Connolly said the deal and the new UK Trader Scheme, which should mean that 98 per cent of trade between Britain and Northern Ireland was tariff-free, and assistance in covering the cost of export health certificates, were “welcome Christmas presents for the business community and families across Northern Ireland”.

“But even with a deal, retailers face a very different retail landscape from January 1st, with many new checks and costs. The result will be rising costs for businesses – some of which may impact consumers,” he added.

In a statement, Manufacturing NI said while “everyone is exhausted by the last four and a half years”, the “work can’t end” with the deal.

“In less than eight days there will be a fundamental change in how businesses here buy from Britain,” it said.

“Despite some easement created by this deal, there will still be significant new complexities and costs, and without the detail, systems and processes, our firms are not ready. As a result the start of 2021 is going to be very difficult,” it added.

Manufacturing NI said the deal came with a significant cost. “It is the first trade deal in history which makes doing business more, not less, difficult, and enforces a full customs border between Britain and the EU and with Northern Ireland.”

Dawn McLaughlin, president of the Londonderry Chamber, said a deal was always “paramount” for businesses in Northern Ireland.

“While it has come at the last possible moment, companies across the country will be relieved to have some certainty and clarity going into 2021,” she said.

“A no-deal, cliff-edge situation on December 31st was unthinkable for businesses in the northwest and would have done untold damage to our regional economy, so it is a relief that this at least will be avoided,” she added.

Ms McLaughlin said the British government must now make clear to businesses what they must do to prepare for the incoming changes. She said: “The work does not end here. It must support business organisations to help and advise local companies, take a pragmatic and flexible approach during the first few months of 2021, and provide the necessary funding that will support businesses to keep trading across the UK and Europe in future.”