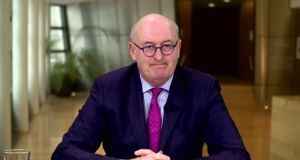 Ireland faces steep risks to its economy due to its exposure to slowing international trade, as a protectionist mood grows internationally and talks with the UK edge forward with little prospect of a deal in sight, European Union trade commissioner Phil Hogan has told The Irish Times.

“Ireland is vulnerable to changes in global trade because 80 per cent of production in Ireland is exported, and therefore we depend more than any other country in the the European Union on export-led economic activity,” Mr Hogan said.

The European Commission has forecast that Ireland’s economy will slump 7.9 percent this year and partially rebound in 2021, while warning this is highly dependent on the vagaries of multinationals and global trade.

In recent days Mr Hogan has been speaking out in favour of the benefits of international free trade, as the pandemic fuels a turn towards protectionism in the EU and beyond.

“I can understand that in the time of crisis the first reaction would be to close down the borders, to become more insular. But that’s a short term game,” Mr Hogan said, noting the heavy reliance of EU countries on exports for employment. “The figures speak for themselves. We have to be strategic in what we do. It would be very foolish not to be outward looking.”

Shortages of products such as ventilators and face masks have driven many countries to resolve to be less dependent on imports of key supplies, a development that the Irish Government sees as a risk because of our highly globalised economy.

United States president Donald Trump this week lashed out at US imports of pharmaceutical supplies from Ireland, and vowed to bring “that whole supply chain back.” Mr Hogan said that this was not in the interests of the pharmaceutical companies, noting that being located within the EU’s Single Market saves them substantial tariff costs.

“They’ve located themselves in Ireland for very good reasons,” Mr Hogan said. “Hopefully some of the sabre rattling that we’ve seen from the United States with regard to the pharmaceutical companies will not come to pass.”

But he warned that signs were not good for the prospect of a trade deal with the UK, which must be agreed this year to avoid an abrupt and economically damaging switch to imposing World Trade Organisation tariffs on trade with the EU on January 1st next year.

“Negotiations are slow at the moment,” Mr Hogan said. “Over the last couple of months we do not see the level of intense negotiation activity that would generate confidence that we can reach a deal by the end of October.”