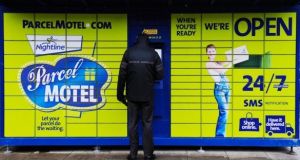 It’s address was used by people who bought items that stated they could only be delivered to a UK address. Photographer: Aidan Crawley/Bloomberg

The self-service parcel service Parcel Motel is to cease providing a virtual UK address from December 28th because of Brexit.

In an email to customers on Friday it said that from that date “our virtual address services in the UK will be temporarily suspended. This means that from this date, we will no longer accept deliveries at the UK virtual address.”

The UK address, in Newtownabbey, Co Antrim, was used by people who bought items from online sites that stated they could only be delivered to a UK address.

The goods were then collected by the company and delivered to one of the Parcel Motel pick-up locations in the Republic.

In the email it said that Brexit will impact on these shipments using the virtual UK address.

“At the end of the year, the UK will leave the single market and customs union. While much remains undecided about the future trading relationship, it is clear that when the transition period ends, the cost, effort and time of moving goods between the EU and the UK will likely increase. All parcels crossing the new border between Britain and Ireland must clear customs and will be subject to customs duty and VAT, which are not included in the initial purchase price of your goods.”