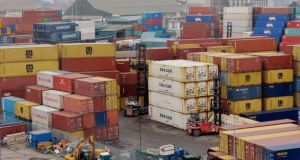 The percentage of cargo coming into Dublin Port from Britain and getting Revenue clearance to immediately enter the State has to more than 70 per cent. Photograph: Alan Betson

The percentage of cargo coming into Dublin Port from Britain and getting Revenue clearance to immediately enter the State has jumped from less than 50 per cent to more than 70 per cent in a week as carriers and importers grow accustomed to new customs regulations.

Revenue’s head of customs operations at the port, Tom Talbot, told a briefing on Tuesday morning that the difference between operations that had prepared for Brexit and those that had not was “quite stark”.

Businesses which had prepared were being rewarded with speedier access to the Irish market, he said.

He said additional checks required by Brexit, as well as the completion of necessary documentation ahead of time, the employing of dedicated customs agents and the provision of necessary funds to cover and taxes due, had seen up to 70 per cent of importers move their cargo swiftly through the port.

Many importers were getting clearance to move out their goods while the ferries carrying their freight were still 30 minutes away from docking at the port.

However, he said 30 per cent of the cargo had been categorised as “orange” or “red”, which required further documentation and checks and had led to delays.

Mr Talbot stressed that when freight was delayed as a result of the changes to the rules regarding imports from Britain, the time goods vehicles were being detained was typically measured in hours rather than days.

He said the volume of goods coming into Dublin Port so far this year was down on the same period last year, something he attributed at least in part to advance preparation and stockpiling by some importers in advance off Brexit.

The level of freight coming in had climbed from about 300 units last week to close to 700 on Monday.

Mr Talbot denied there had been any undue delays at the port or congestion, saying the port was “no where near capacity” and pointing to more than 200 free parking spaces for heavy goods vehicles since the beginning of the year.

Asked about reports that freight companies had started moving goods from the UK into the Republic through Northern Ireland in order to avoid customs clearance and delays, he pointed out that goods coming into any port on the island of Ireland from Britain had the same rules and customs checks applied.