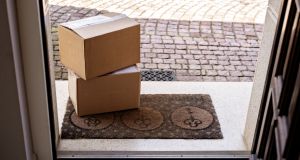 When shopping online from a UK business, contact the business before check-out to see if it operates as DAP or DDP and if it is VAT registered in the State. Photograph: iStock

Towards the end of 2020, the double-edged sword of Covid-19 and Brexit pierced the armour of both An Post and the Royal Mail. They saw unprecedented levels of demand and a lack of clarity on changes from what was then a still uncertain trade deal between the EU and UK.

On December 31st, in that confused climate, I ordered some items from a retailer in England at a cost of £86.50 (€96). At the time of ordering, Royal Mail had suspended postal orders to Europe due to the uncertainty of any changes Brexit might bring so the only option available was a £15 courier. I went with it.

On the morning of Tuesday, January 5th, a courier service sent me an email to say it was delivering my items. The email said import duty/tax payment of €38 was due. There was €25.50 in VAT and another €14.50 for an “advanced payment/handling charge”. When I asked the courier company to explain the latter charge more clearly, they did not get back to me.

The retailer, Hattons Model Railways, is a VAT-registered company in the State. “The uncertainty approaching Brexit was definitely making people hold back...we saw a slowdown [in orders coming from outside Britain],” says managing director Richard Davies.

“We’ve had more questions in the early part of January than we have had in December which we hadn’t anticipated.”

Davies believes there is a lack of education for customers regarding payments, particularly when it comes to the unfamiliar terms of Delivered Duty Paid (DDP) and Delivered At Place (DAP).

“In hindsight, I recognise my mistake was not to identify those terms and start educating customers about them,” Davies says.

While these new terms may not be familiar to the public, he says the consequences of the UK’s departure from the EU are more practical than financial for the Liverpool-based business.

“Money always finds a way through. In the end, after a lot of worry about Brexit, I don’t think there’s been any negative impact. It’s not really a political or even economic situation, it’s more logistics.”

That’s the view of one business in one part of England and that view will undoubtedly contrast with others in different parts of the UK. What is most striking, however, is the simple lack of certainty even after four years of headlines and bulletins dominated by the result of the 2016 Brexit referendum.

When shopping online from a UK business, it would pay for Irish consumers to contact the business before check-out to see if it operates as DAP or DDP and if it is VAT registered in the State.

It can only be hoped that things will become a little more straightforward sooner rather than later. For now, I’ll be sticking to my new year’s resolution of buying Irish unless there is absolutely no other option.

“I purchased clothes from Trotters, an English children’s clothing store, at end-2020,” writes Susa. “But prior to delivery I was contacted by DHL for [an] import charge of €21 which I had to pay in order to receive my order. It seems a very expensive charge as the clothes ordered were approx €35. Won’t be ordering from them again.”

Then there was Abdullahi. “Before Brexit, online shopping was very easy and deliveries arrive fast. Now I ordered a book three days ago and it says that it’s going to be delivered between the 18th and 20th of January. I also tried to order a stethoscope online and it said it cannot be delivered due to Brexit. It is very tough now.”

PJ writes: “My wife bought a coat from ie.burberry.com on sale. There was no mention of taxes or custom charges. The charges were as follows – €100 taxes, approx €50 in custom duties, and €18 other for a €400 jacket. Refused to pay so UPS won’t release.”

Ciarra ordered Charlotte Tilbury make-up on December 27 at a cost of €105. “I got a message from DHL this morning to say my package was on the way. Then I got a follow-up email to say that I had to pay €41.80, broken down, that was €14.50 advance payment?! And €27.30 VAT at import. The email said if I didn’t pay it, I wouldn’t get my package. I’m afraid to pay as I don’t know is it a scam or where they got their figures from, still no sign of the package, although it was due to be delivered today!”