Northern Secretary has ‘positive meeting’ with DUP over Stormont 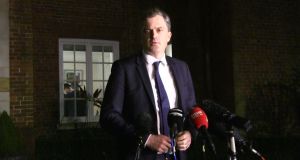 The DUP is not prepared to sign up to “quick fix” deal to restore the North’s Assembly, the MP Sammy Wilson has said.

“We wanted to move forward and have as quick an outcome to these talks as possible but we will not be simply accepting any kind of deal just to satisfy his desire to have the Assembly up and running,” Mr Wilson said of the Secretary of State, Julian Smith.

The DUP met the North’s Secretary of State, Julian Smith, in Westminster earlier on Friday, in what Mr Smith described as a “positive meeting”.

“I am confident that we can move things forward,” he said.

Mr Wilson said the DUP had asked for the meeting after what he described as Mr Smith’s “very unhelpful comments” on Thursday.

“We made it quite clear that of course as a unionist party we wanted the stability of devolution in Northern Ireland not however not an assembly at any cost,” he said.

It was strange, he said, that the UK government had been unwilling to blame Sinn Féin for its role in the crisis, but suddenly Mr Smith was “pointing the finger” at the DUP.

“If he had a rush of blood to the head yesterday hopefully now he is going to go back to being impartial on these issues,” he said.

On Thursday evening both Julian Smith and the Tánaiste, Simon Coveney, blamed the DUP for scuppering the chance of a deal before Christmas.

They said four of the North’s five main parties had been prepared to sign up to a document outlining an agreement to reinstate the Stormont Assembly.

There has been no devolved government in Northern Ireland since January 2017, when it collapsed following a scandal over a renewable heating scheme.

Mr Smith said the number of outstanding issues was “extremely limited” and he had wanted to publish the text of an agreement, but the DUP was not prepared to sign up to it at that stage.

While some further negotiation was necessary, he said, the remaining stumbling blocks could be addressed “in a matter of hours not days.”

Proposals to reform the petition of concern - the blocking mechanism which gives a community veto over the Assembly’s decisions and which has been used by the DUP in the past to block changes like the legalisation of same-sex marriage - have emerged as a key sticking point in efforts to seal a deal.

The sustainability of the Assembly is also a key factor, with the DUP seeking changes to ensure the assembly is more stable and cannot be collapsed as readily in the future.

He told BBC Radio Ulster the DUP “turned up yesterday with no intent of doing business, no intent on seeking out detail on the financial package or any other issue, and then went out and briefed the media saying this wasn’t happening before Christmas.”

Mr Murphy was responding to an interview with the DUP MP Gregory Campbell, who said his party was “being asked to agree to the release of a paper which we haven’t seen and from our contacts with other parties, they haven’t seen either.” To agree to accept a financial package without seeing the details, he said, was “simply not doable.”

Mr Campbell also said that “the talks aren’t over … we are available and will be available today[FRIDAY].”

Sources close to the talks have said they do not expect a significant development before Christmas.

Responding to Mr Campbell’s statement that the DUP had not seen the detail of the agreement, Mr Murphy accused Mr Campbell of being “disingenuous”, and said “it would have been possible to go through detail.

“We met with the Department of Finance yesterday and we talked over issues we would like to see in a financial package … that’s the work that was to be done yesterday and if you don’t turn up and don’t engage in that and then you say ‘well, we didn’t see the detail’, that’s disingenuous.”

None of the parties had seen the text of the proposed deal, he said. “But we know the broad content of the paper is the issues we all discussed over many, many months,” said Mr Murphy.

It is understood there would have been the opportunity to discuss the detail of the deal once the text had been published, and that all parties would have been aware of what it contained.

Some sources have indicated that the DUP chose not to do a deal before Christmas in order to give them time to consult their grassroots.