Ballymena’s Wrights Group, one of NI’s biggest exporters, has been hit by uncertainty 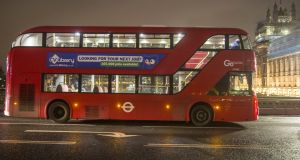 The Wrights Group, a Ballymena company that built the London red Routemaster double decker bus, known as the “Boris bus”, has confirmed it is in “advanced discussions with a limited number of investors”.

The Co Antrim family-controlled bus builder has been seeking a buyer or investor since July after it emerged the business was in financial difficulties.

The company said on Monday it was “optimistic” it could secure a deal.

It is one of the North’s leading exporters, selling buses designed and manufactured in Northern Ireland to operators in London, Las Vegas, Hong Kong, Dublin and, more recently, Latin America.

However, it has been a very bumpy road for the business since the UK voted to leave the EU. William Wright, who co-founded the company, was a key supporter of the Leave campaign in Northern Ireland. But the Brexit vote caused a degree of uncertainty in its marketplace, and the company found that some of its customers reconsidered investment plans because of the UK’s changing relationship with Europe.

Many of the Wrights Group customers are private and State-owned transport operators, and some of these have parent companies with headquarters in Europe.

Union officials say staff are stunned by recent developments because, although they had been aware of a downturn in some key markets, nobody expected the group to have to seek a rescue package from outside investors to save the company.

There had been some hope that Northern Irish businessman Darren Donnelly would step in and acquire the Ballymena company, but on Monday his spokeswoman said he was withdrawing from any possible acquisition talks.

Mr Donnelly and his father, John, sold one of their businesses, Toomebridge-based SDC Trailers, to the Chinese group CIMC Vehicles for an estimated £100 million in 2016.

His spokeswoman said on Monday that although Mr Donnelly had previously been in discussions with the Wrights Group, he was “no longer pursuing the potential purchase of the Wrightbus company”.

There has been significant industry speculation that a number of Chinese companies have also examined the possibility of acquiring the group, including both Weichai and BYD.

The Ballymena company declined to disclose who it was in talks with.

According to George Bash, regional officer with the trade union Unite, the workers are also in the dark and feel “helpless”.

“They are asking themselves: how did it get to this stage? This is an industry-leading company that has developed ground-breaking hydrogen double-decker buses,” he said.