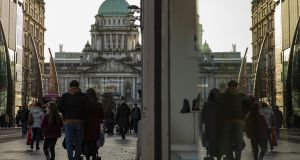 MPs from the DUP, the SDLP and Alliance will join forces on Tuesday to seek changes to Boris Johnson’s Withdrawal Agreement Bill aimed at protecting business in Northern Ireland.

The three parties are backing amendments to the bill to guarantee “unfettered access” for Northern businesses to the rest of the United Kingdom.

Speaker Lindsay Hoyle will decide which amendments will be debated but even if they are chosen, the amendments cannot pass without the support of the Conservative government, which enjoys an 80-seat majority.

Business groups in Northern Ireland said they want the certainty of legislation to guarantee that Northern Ireland will, as the withdrawal agreement promises, have unfettered access to the rest of UK through proposed changes to the Brexit bill.

The amendments are backed by the North’s other two main parties, Sinn Féin and the Greens, as well as more than a dozen business groups including the Confederation of British Industry, the Institute of Directors and the Ulster Farmers’ Union.

“From a policy or legal perspective, there is no reason why the UK government should not agree to these amendments. It doesn’t tie their hands; it doesn’t create landmines in the future. It puts their words and promises down into a legal reality,” said Stephen Kelly, chief executive of Manufacturing Northern Ireland, another of the business groups supporting the amendments.

“We would hope that the unprecedented support of all the political parties in Northern Ireland plus the business and farming communities would be accepted by parties across the House and that they would accept these amendments.”

Companies in Northern Ireland are concerned that the Brexit deal will put a new trade border in the Irish Sea under the proposed agreement that avoids a hard Irish land border.

The proposed changes include a definition on “unfettered access” and the cost for businesses as well as compensation for companies to ensure they are not left out of pocket by any changes as a result of Brexit affecting their access to the internal UK market.

Aodhán Michael Connolly, director of Northern Ireland Retail Consortium who chaired a meeting of business groups over the Christmas period that agreed on the amendments, said businesses were looking for “a hand-up, not a hand-out” with the proposed changes.

While no figure has been put on the cost of compensation, Mr Connolly said “around the room on Friday it was very clear that for each of the industries the additional costs could run to tens of millions each,” spelling a potential cost of more than £100 million (€118 million) across the board.

He said: “Business likes certainty and having these amendments through would provide that certainty.

“It provides some clarity to some of the things that the prime minister has said and it is not trying to frustrate parliament in delivering the EU exit. It is trying to facilitate an EU exit that allows Northern Ireland to continue to prosper.”