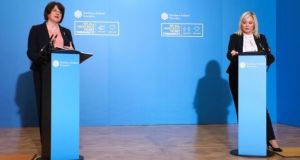 Arlene Foster (L) in a jointly issued statement with Michelle O’Neill (R) said on Thursday that the Northern Executive had been united in supporting the need for a trading deal. File photograph: Kelvin Boyes/Press Eye/PA Wire

The North’s First Minister Arlene Foster and Deputy First Minister Michelle O’Neill while holding opposing positions on Brexit have welcomed the Christmas Eve deal struck between the European Union and the British Government on the UK quitting the EU.

Ms Foster in a jointly issued statement with Ms O’Neill said on Thursday that the Northern Executive had been united in supporting the need for a trading deal.

“I welcome the successful conclusion of these negotiations,” she said.

“This is the start of a new era in the relationship between the UK and the EU and in Northern Ireland we will want to maximise the opportunities the new arrangements provide for our local economy,” added Ms Foster.

Ms O’Neill said while she had distinctly different political positions with Ms Foster on leaving the EU, they were agreed that it was in no-one’s interests to leave the EU without a deal.

“Therefore this announcement is good news which will be welcomed across the whole island,” she said.

“As an Executive we will now need to consider the detail of the agreement because there will be many questions on what the agreement means for businesses and citizens and it is important they get that clarity,” said Ms O’Neill.

We voted against Brexit, it is being foisted upon us against our will. Todays deal will be welcomed across the island. The Good Friday Agreement has been protected, there will be no hardening of the border and protections for the all-island economy are in place.

“A sensible trade deal between the United Kingdom and the European Union was always the most favourable outcome for Northern Ireland.”

A deal is better than no deal but we shouldn't have to settle for a future that is limited to the least worst option.

It's time to have an open conversation about a future that meets the needs, hopes and ambitions of our people. https://t.co/ocLE8MBp2I

“Moving forward, we will continue to work to seize the opportunities and address the challenges which arise from the United Kingdom’s exit from the European Union,” she said.

The SDLP’s Mr Eastwood said the changes the island of Ireland now faced were “fundamental”. Brexit raised questions about a united Ireland, he intimated.

He said, “It is time for an honest conversation that begins with the truth that while the UK leaves one union, the future of another is called into question. The SDLP will not shy away from the difficult conversations because we know we must lead our communities again through this time of new challenges as we have done before, together and in partnership.“

Mr Eastwood said the deal would “not undo the enormous damage caused by Brexit to people, businesses and communities in Northern Ireland”.

“This entire Brexit fantasy is a future that people here do not want and did not vote for,” he said in referring to how 56 per cent of the electorate in the North voted to remain in the EU.

“A deal is better than no-deal, but the best deal will always remain being at the heart of the European Union. That is what our people voted for in 2016, we all deserve a future that is no longer limited to the least worst option,” he said.

“There will be no celebrating a deal that ultimately diminishes what we’ve worked so hard for over the last 50 years,” said Mr Eastwood.

The Ulster Unionist Party leader Steve Aiken said while the deal might bring some certainty to businesses “the benefits bring little to celebrate as we remain under the unequal and massively bureaucratic protocol, with the imposition of an Irish Sea border just days away”.

“No amount of spin from Boris Johnson or those who facilitated and cleared the path for him can hide that fact,” he said.

“There is no such thing as a good or sensible Brexit,” he said.

“All versions of Brexit will leave Northern Ireland in a worse situation than before and will see the loss of a broad range of opportunities and benefits. These include the loss of freedom of movement and impact on the service economy,” added the North Down MP.

“These decisions deliver on our commitments to Northern Ireland, ensuring that existing economic and social links with Great Britain and Ireland will be preserved, while protecting the Belfast (Good Friday) Agreement and the hard won gains of the peace process,” he said.

“Northern Ireland is uniquely placed to benefit and prosper from this deal, making it an even more attractive place to invest, trade and do business,” added Mr Lewis.