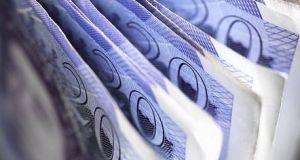 According to the Northern Ireland Statistics and Research Agency, the median salary as of December 2019 was £27,434. Photograph: Getty Images

Business leaders in the North have called on the UK government to rethink its new points-based immigration scheme.

They say it is a threat to Northern Ireland’s economy, and will exacerbate labour shortages, particularly in sectors such as agri-food and hospitality.

On Wednesday the British government unveiled its plans for the new system. It will apply to both EU and non-EU citizens, and will come into force on January 1st, 2021.

Skilled workers who want to live and work in the UK must gain 70 points to be eligible to apply for a visa. Skilled workers must be in receipt of a job offer from an approved employer sponsor which meets a minimum general salary threshold of £25,600. They must also be able to speak English.

In its policy paper the UK government said the new measures would “reduce overall levels of migration, and give top priority to those with the highest skills and the greatest talents”.

It said that for the “first time in decades the UK will have full control over who comes to this country and how our immigration system operates”.

It said the UK needed “to shift the focus of our economy away from a reliance on cheap labour from Europe, and instead concentrate on investment in technology and automation. Employers will need to adjust.”

According to the Northern Ireland Statistics and Research Agency, the median salary as of December 2019 was £27,434. Approximately a fifth of all jobs in the North are regarded as low paid – the lowest of any part of the UK.

He said the North’s unemployment figures were already low, and there would be labour shortages. There would be a knock-on effect in terms of competitiveness, prices and productivity.

“We need to be able to staff our industries, and the system that they’re going to put in place doesn’t allow us to do what we do now.”

Seamus Leheny, policy manager for the Freight Transport Association in Northern Ireland, said 15 per cent of drivers and 25 per cent of warehouse staff were from the EU, predominantly from eastern Europe.

“These are jobs we struggle to fill right now, so to think that we can solely get the workforce from local people who don’t apply for these jobs,” Mr Leheny said. “Often a lot of people don’t want to do them.

“It’s even worse for us in Northern Ireland because we share a land Border with the Republic. So you’ll have a lot of people will simply just move across the Border, or you may actually see some businesses relocate to the Republic where they have easier access to staff.”

The chief executive of Hospitality Ulster, Colin Neill, said the new rules would “simply decimate the local hospitality sector”, and there had been a failure to take into consideration Northern Ireland’s “unique set of circumstances”.

Janice Gault, the chief executive of the Northern Ireland Hotel Federation, said there needed to be special circumstances for the North. She said 27 per cent of the hospitality workforce in the North was from the EU.