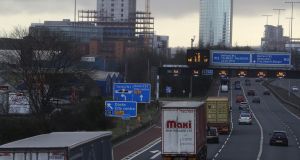 The first of the so-called grace periods – which limits the amount of bureaucracy applied some goods travelling from Britain to Northern Ireland, such as those going to supermarkets – is due to end on March 31st. Photograph: PA

The North is facing an “abyss” once the Brexit “grace period” on imports from Britain ends unless action is taken, one of its major haulage companies has warned.

“Northern Ireland’s going to get worse in April if we don’t get some easement,” said Paul Jackson of McBurney Transport in Ballymena, Co Antrim. “As a haulage business this is currently an unsustainable model, and we have to be engaged with directly and we have to have it sorted out before the first of April, we have to.”

Mr Jackson was among a number of hauliers and industry representatives who gave evidence to the Stormont Infrastructure Committee on Wednesday on the issues facing the sector after Brexit.

The first of the so-called grace periods – which limits the amount of bureaucracy applied some goods travelling from Britain to Northern Ireland, such as those going to supermarkets – is due to end on March 31st.

The hauliers outlined their grave concerns around the financial losses incurred by their sector in the North due to the new customs requirements and additional delays since the end of the Brexit transition period on December 31st, and warned some firms could be forced out of business.

They also highlighted the impact of delays on the health and wellbeing of drivers, and criticised waiting times and the level of checks at Dublin Port, as well as the available facilities. Mr Jackson said one of his drivers had waited at the port for 32 hours on the first day of the new rules, sand had to ask permission to use the bathroom.

“Our operation in Dublin is just a complete mess today, there’s no other nice way of saying it,” Mr Jackson told the Stormont committee.

“It can’t be allowed to happen here [in Northern Ireland]. We’ve got a bit more time here to try and make that happen but also need whatever influence we have with this committee or any other committee to try and get some assistance from our near neighbours to make this work much better for us all.”

Initial teething problems in the North, they said, were made worse by the lack of readiness of suppliers in Britain, which meant haulage firms had to ship trailers back to Northern Ireland empty.

Mr Jackson said that in the first full week of the new arrangements the firm incurred between £67,000 and £73,000 in additional costs, and the first two weeks of January were 24 per cent down compared to January 2020.

McBurney Transport has already had to ship back 63 empty trailers. “We’re simply running out of trailers in Northern Ireland. We as a haulage business can’t afford to ship more empty trailers,” Mr Jackson said.

“You wouldn’t want many weeks of what we’ve just had. It’s extremely urgent that we plug this, we simplify this.”

Daryl Morgan from Morgan McLernon Refrigerated Transport said that in the first week of January his firm had shipped home 70 empty trailers, and 30 last week. “The downturn in trade is evident,” he said.

“We, like most Northern Ireland hauliers, have become customs agents,” he said, explaining that he had assigned seven staff members to deal with customs, and he would have to at least double this.

Chris Slowey of Manfreight said his firm would have to increase its rates by approximately 12 per cent to cover the additional costs. “That will leave Northern Ireland plc ineffective in the marketplace against a GB manufacturer producing the same goods,” he said.

Patrick Derry of Derry Refrigerated Transport said there needed to be “financial support for the hauliers ... there’s not enough profit in the business to send trucks out full and come back empty, it just doesn’t financially pay.”

The committee agreed to write to the Department regarding a support scheme for the haulage industry, as well as other issues including welfare provision for drivers.

The Northern Ireland policy manager for industry body Logistics UK, Seamus Leheny, told the committee the problems at Dublin Port stemmed from IT failures because the UK and Irish systems were not fully integrated, the lack of a similar grace period between imports from Great Britain to the Republic, and the Irish implementation of a 24-hour pre-notification period – rather than the four hours currently enforced in the North – and the application of checks on 30 per cent of goods.

Mr Leheny said that the volume of trade via Dublin was “severely down” and businesses in Northern Ireland were avoiding Dublin and instead sending goods to Europe using the Rosslare-Cherbourg route and returning via Calais-Dover.

“We’ve got to avoid another cliff-edge, and also there’s a cliff-edge on the parcel sector ... some of our members would carry upwards of 6,000 parcels on a trailer, and it’s clear to say we would struggle on customs entries on that so we need a long-term solution to avoid the need for those declarations, especially business-to-consumer parcels.”

Aodhán Connolly of Retail NI also said that further mitigations and simplifications were needed to address the challenges faced once the grace periods ended.

However he stressed that while there had been some disruption to food supply in Northern Ireland due to a “perfect storm” of Brexit and other factors including Covid-19, shortages had only ever affected several hundred items out of 40,000-50,000 that might be stocked in a large supermarket, and while there were clearly issues a “good supply of products” was regularly reaching stores in the North.

“It wasn’t helped by the media [and] pictures of empty shelves and continuing to do the story on a round the clock basis,” he said.

Appearing before the Northern Ireland Affairs Select Committee, also on Wednesday, the North’s Secretary of State, Brandon Lewis, said in relation to issues affecting hauliers and the importation of goods to Northern Ireland that he was seeking to get “a fixed permanent solution” before the grace period ends.

He indicated guidance on how the matters might be addressed would be issued shortly by the British government.

Northern Ireland protocol: Unionism shoots itself in the foot

5:28 Sector must keep focus on high-quality product while looking overseas and to China

Bobby McDonagh: Time for a bit of perspective on EU relations

5:07 We must ensure the lessons drawn from EU’s article 16 error are the right ones

6:55 Northern Ireland is no longer governed as integral part of UK