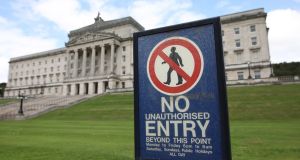 ‘Unfettered access was promised, but it looks less and less likely that it will be delivered.’ Photograph: Peter Morrison/PA

The British government has left businesses in the North ill-prepared for new obligations they will face from next January by adopting a “political approach” to implementing the Northern Ireland protocol, a cross-party group of MPs has warned.

In a report published on Tuesday, the Northern Ireland Affairs Committee of the House of Commons says businesses lack clarity about the detail of new processes required under the protocol, which was agreed between Britain and the European Union as part of the withdrawal agreement last October.

“With less than six months to go, businesses are still in the dark about what they should be preparing for on January 1st, 2021. The situation is now urgent, and the continued lack of detail risks Northern Ireland not being prepared for the new trading arrangements, an outcome which would have significant economic consequences.

“We remain to be convinced that the government fully understands that its political approach, apparently informed by limited understanding of how business works, provides neither the clarity nor the detail that Northern Ireland business requires. Political theory cannot trump commercial necessity. We also remain to be convinced that the cumulative impact of protocol uncertainty, coupled to Covid-19, has been fully reflected upon,” the report says.

The committee, which approved the report unanimously, includes MPs from the DUP, SDLP and Alliance as well as the Conservatives and Labour. The report is highly critical of the British government’s command paper on implementing the protocol for failing to recognise that achieving its stated aim of limiting friction in the movement of goods between Britain and Northern Ireland required negotiation.

“Political process must not trump the interests of the people of Northern Ireland. The government may be able to wait until the wire for clarity on customs arrangements, but business cannot. Those trading across the Irish Sea have been told to prepare without knowing what to prepare for.

“It’s now time for them to get that clarity, and they must have it by October 1st. If not, business will not have time to prepare for the realistic prospect of friction and delays to products moving between Great Britain and Northern Ireland. This will increase their costs, with an accompanying increase in the cost of living,” the committee’s Conservative chairman Simon Hoare said.

Mr Hoare said that such friction would be incompatible with the British government’s promise of “unfettered access” for northern businesses to the rest of the UK market. He said that if the burden proved costly, and diminished the competitiveness of northern business, the government should reimburse firms for the cost of complying with the protocol.

“Coronavirus has taken a heavy toll on business and the economy which will only get heavier as the looming recession bites. There is no need, and no reason, to add insult to injury for political gain.The government needs to stop gambling with the future of business and of the people of Northern Ireland. Instead, it must set out detailed and realistic proposals on how customs processes will work and which goods will be affected,” he said.

“Unfettered access was promised, but it looks less and less likely that it will be delivered. Northern Ireland is part of the UK, and it must not experience particular disadvantage because of Brexit. ”