‘No special inspections’ at Border regardless of Brexit outcome 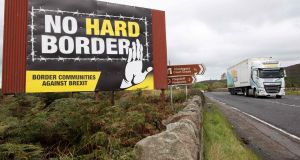 An anti-Brexit, pro-Irish unity sign on the Dublin road in Newry. Photograph: Paul Faith/AFP via Getty

No special checks on plant and animal products will be carried out along the Border with Northern Ireland regardless of how the ongoing Brexit negotiations conclude, the Department of Agriculture has said.

Sanitary and phytosanitary (SPS) checks are conducted by vets and food safety inspectors on plant and animal products with a view to protecting EU residents, animals and plants from incoming diseases, pests or contaminants. These checks are separate from customs checks but are usually carried out at customs posts.

Documents released under the Freedom of Information Act show the department steadfastly refused to countenance such checks at the Border, at the height of the Internal Market Bill controversy earlier this year.

Farmers, importers and food distribution companies – even sandwich distributors from the UK – all expressed concern about SPS checks on the movement of agri-products across the Border.

EU rules strictly stipulate that at least 50 per cent of lorries with cargo of this nature must be physically inspected as it enters EU territory. Under the Brexit Withdrawal Bill, there was to be no Border infrastructure on the island of Ireland, with all such checks carried out at ports.

However, concern about SPS checks heightened when the UK Internal Market Bill sought to avoid the so-called Irish Sea border, for fear of disruption to the UK internal market. Importers feared this would effectively reintroduce the prospect of controls on the Border.

In response to a request for information on the numbers and timetable for the deployment of SPS checks on the Border, the department responded, “There will not be any checks along the Northern Ireland Border with Ireland”.

The response cited the Brexit Withdrawal Agreement, including the Northern Ireland protocol, “which will remain in place regardless of the EU- UK future relationship negotiations”.

“Northern Ireland will continue to apply the European Union’s customs code and will remain aligned to those rules of the single market,” it said.

The response, dated November 20th, made no reference to the controversy over the Internal Market Bill, which arose in September and was eventually assuaged in early December when the UK government agreed to withdraw controversial clauses that would have prevented “a border down the Irish Sea” in the event that talks with the EU fail to reach agreement.

But on December 8th, the UK and EU announced “an agreement in principle” on issues including border control posts, the supply of food and medicines and clarification around state aid in Northern Ireland.

The department said it was recruiting more than 300 staff to be deployed by next year to help carry out SPS checks at Irish ports.