Spouses, children and parents to be eligible for card which addresses Brexit-created gap 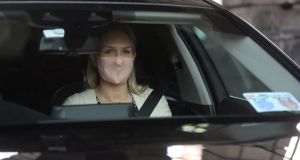 A new preclearance/visa scheme is being introduced to ensure that non-EEA family members of UK nationals seeking to move to the Republic next year can join them.

Announcing the new scheme, Minister for Justice Helen McEntee said that after the Brexit transition period ends on December 31st, UK nationals who wish to move to the State and bring their non-EEA family members will no longer be eligible under the European Union freedom-of-movement directive.

“To ensure an alternative pathway is in place immediately following the UK withdrawal from the EU, the preclearance scheme will be open for applications from January 1st, 2021,” she said.

A Department of Justice statement said UK citizens would continue to enjoy existing arrangements under the Common Travel Area including the freedom to live and work in the State after the transition period following the UK’s exit from the EU ends later this month.

Under the new arrangements UK nationals will then be able to sponsor their eligible non-EEA family members to join them in Ireland.

Applications are only required from those planning to stay in the State for longer than three months. The scheme applies to both visa and non-visa required non-EEA nationals.

Eligible non-EEA citizens can apply, before travelling to Ireland, for permission to live in the State and, once secured, they will be able to travel and live in the Republic with their UK national family member.

Only the spouse, civil partner or “de-facto partner” of the UK nationals and either partner’s dependent children or dependent parents will be eligible to apply. Someone will be deemed a de-facto partner if they “have cohabited in a relationship akin to marriage for a minimum period of two years” prior to their application.

Providing more detail on the new arrangements, Ms McEntee said: “This scheme only applies where the UK citizen has come to live in Ireland after December 31st, 2020, or, if living in Ireland before December 31st, 2020, is not a beneficiary of the citizens’ rights provisions under the withdrawal agreement between the United Kingdom and European Union.

“If they are living in Ireland on or before that date they, and their eligible non-EEA family members living with them, will in most cases be a beneficiary under the withdrawal agreement. The non-EEA family members can simply replace their current residence permission granted under EU law with a domestic permission under the terms of the withdrawal agreement.”

The policy document released by the department said successful applicants’ initial permission would be granted for a 12-month period. “Permissions to reside are regarded as temporary but may be renewed after the first year, on a Stamp 4D basis, for a further two- year period and thereafter on a three-year basis,” it said.

The policy document sets out the eligibility criteria for the scheme and how to apply. Applications can be made online from January 1st.