Brandon Lewis insists: ‘We will not be having a border down the Irish Sea’ 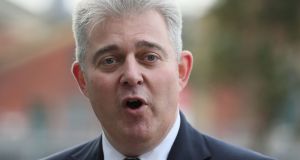 The North’s new secretary of state has said both he and the British government are “absolutely committed” to implementing the measures agreed in the deal which restored powersharing in Northern Ireland recently.

This includes a commitment to bring forward, within 100 days, legislation to implement the provisions on legacy outlined in the 2015 Stormont House Agreement.

Among these measures is the creation of a Historical Investigations Unit (HIU), a new, independent body which will investigate outstanding Troubles-related deaths.

“The New Decade, New Approach deal is something the government is absolutely committed to and I see my job as actually building on that and delivering on the promise of that agreement,” Brandon Lewis said.

He also said that in regard to Brexit “We are absolutely clear. As a UK government, we will not be having a border down the Irish Sea.”

Mr Lewis was appointed secretary of state on Thursday after the previous incumbent, Julian Smith, was sacked by the UK prime minister, Boris Johnson.

He told reporters he was “very fortunate to be coming in as secretary of state off the back of somebody who did a great job and actually delivered, as I say, that agreement”.

Mr Smith, he said, had been “a superb secretary of state. I’ve got tough boots to fill and the exciting job of delivering on that agreement.”

Mr Lewis visited Queen’s University’s Centre for Security Information Technologies (CSIT) in the Northern Ireland Science Park in Belfast on Friday afternoon, in what was his first trip to the North in his new role.

During his first day in office he also spoke by telephone to Tánaiste Simon Coveney, as well as the North’s first and deputy first ministers, DUP leader Arlene Foster and Sinn Féin’s Northern leader Michelle O’Neill, as well as to the Chief Constable Simon Byrne.

Mr Coveney said on social media he and Mr Lewis had had “a very positive first call” and he was “looking forward” to working with him “for as long I hold my role in government”.

Ms O’Neill said following her conversation with Mr Lewis they agreed to meet “as a matter of urgency” to discuss “important matters including his government’s approach to the legacy of the conflict, particularly in relation to the bad faith shown over the issue of pensions for those injured as a result of the conflict”.

Mr Johnson has pledged to end what he describes as “vexatious prosecutions” against former servicemen.

Ms O’Neill also said she intended to challenge Mr Lewis on the financial commitments made by the British government in the New Decade, New Approach deal and on Brexit.

Meanwhile, Ms Foster told the BBC that Mr Lewis “has to be an advocate for the union and I very much hope that he is”.

But Mr Lewis refused to be drawn on whether it was now time for a Border poll. “I’m fully aware of my responsibilities as secretary of state as per the Good Friday [Belfast] Agreement,” he said, “but I’m going to focus for now on what I think is the best thing for Northern Ireland, which is delivering on the New Decade, New Approach Agreement.”

Mr Lewis is a former chairman of the Conservative Party and has been MP for Great Yarmouth since 2010.

Both he and Mr Johnson have previously said there will be no customs or regulatory checks on the Irish Sea as a result of Brexit.

The EU’s chief negotiator, Michel Barnier, said during a recent speech in Belfast that there would be regulatory checks at Northern Ireland’s ports and airports for goods arriving from Great Britain.

Asked to clarify this, Mr Lewis replied: “We’ve always said the United Kingdom, Great Britain and Northern Ireland is going to be one area and all will be able to benefit from our future global trade deals.

“I appreciate what Michel Barnier says, he’s a very good man trying to do a good job for the EU, but this is also the man who said we couldn’t open the withdrawal agreement. And our prime minister got that agreement opened, got a new agreement, got it through parliament and we’ve left the European Union and we’re going to build a future beneficial economy for the whole of the United Kingdom as one,” he said.