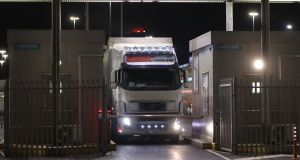 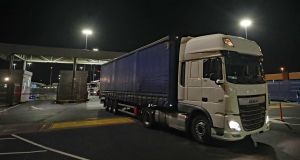 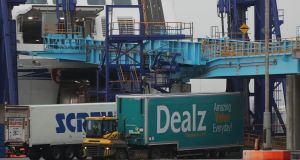 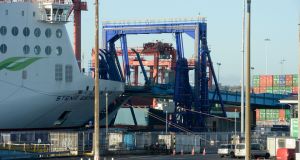 Most lorry drivers arriving on ferries from Britain at Dublin Port in the hours after Brexit came into effect did not know whether they had to go through customs or not, according to State officials.

The Department of Transport contacted haulage groups on Friday morning to say most lorry drivers arriving on the first post-Brexit ferries had not checked with the online customs system to see whether they should be “green-routed” out of the port or “red-routed” to checks and inspections.

As a result of this, the department said that lorry drivers did not know where to go. Haulage groups were urged by the department to remind drivers urgently that before exiting the port they had to check their “customs channel” and that if they exited the port without having their goods from Britain cleared for customs, it would be an offence, and that fines and prosecutions may arise.

The Revenue Commissioners have said they do not plan to impose sanctions “on day one”. Its preference is to work with businesses where “genuine error” occurs, but action could be taken.

“Where we need to, Revenue will not be found wanting to apply those sanctions,” said Tom Talbot, the head of customs operations for the Revenue Commissioners at Dublin Port on Friday.

The Irish Road Haulage Association (IRHA) has called on the Revenue Commissioners to create an emergency “pre-boarding notification” identification number – a number required post-Brexit to be able to board Irish-bound ferries from Britain – to prevent drivers being delayed.

Eugene Drennan, president of the IRHA, said lorries could be allowed to board with this number and mistakes on customs paperwork corrected later in order to keep goods moving.

A Revenue spokeswoman rejected the idea of an emergency PBN saying that it would be “no different to effectively allowing a free-for-all in terms of entry onto the ferry with potential and very likely serious consequences for all trucks on the ferry on arrival at the port in Ireland.”

It “simply would not be acceptable to the legitimate trade or indeed Revenue,” she said.

Aidan Flynn, general manager of the Freight Transport Association Ireland, said that mistakes were expected with the new system and that enforcement could lead to delays, particularly when the system is tested with heavy volumes.

“The real cause of concern is that where mistakes are made and the authorities implement the rule of law, then the congestion builds up very, very quickly and that creates massive logjams in the system that we don’t want to see,” he said.

Overall, low volumes of traffic meant that lorry freight arriving from Britain flowed smoothly on first day of post-Brexit border controls at Dublin Port, but one in five Irish-bound lorries arriving at Holyhead in Wales were turned back because of incorrect paperwork.

There were no delays at Dublin, Rosslare or Holyhead ports. New systems to manage post-Brexit traffic and checks worked efficiently after the United Kingdom’s departure from the European Union single market and customs union came into effect on Thursday, though on unusually low-freight volumes.

Stena Line Ports, which operates Holyhead, said that about 20 per cent of a small number of lorries heading for ferries to Dublin were turned back. This occurred because they did not have the correct paperwork in place in order to secure pre-boarding notifications to board the ferries.

A company spokesman said most vehicles returned with their paperwork in order, but a small proportion, about 5 per cent, were unable to embark because of incorrect documentation.

Volumes were unusually low on “the quietest weekend of the year” for freight traffic, said Mr Talbot. He expects traffic volumes to increase from Monday and to expand from Monday week.

“We had no concerns but we are well aware that this is an unusual day in terms of volume . . . our systems are working. We are ready for the increase in volume next week,” he said.

Mr Talbot said that some lorry drivers did not check their “customs channel” 30 minutes out from docking to see if they were “green routed” to exit the port or “red routed” to be directed to Revenue’s customs or Department of Agriculture inspection facilities at the port.

A small number of lorries arriving from Holyhead on the first ferry of the day, Irish Ferries’ vessel Ulysses, were directed to customs for checks that each took two to three minutes, he said.