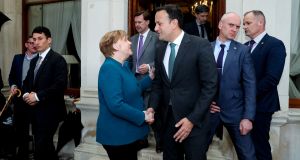 A week ago, when Dr Angela Merkel’s visit to Dublin was announced, a German spokesman told our Berlin correspondent Derek Scally the “visit is the message”.

Nothing that happened at Farmleigh on Thursday contradicted that summary. Merkel, according to Government sources with direct knowledge, asked if it would be helpful if she visited. Taoiseach Leo Varadkar, despite some misgivings among his aides that it would be interpreted as the chancellor coming finger-wagging about the Border, was enthusiastic.

Merkel is the most powerful politician in Europe, the most important and frequently decisive voice on the European Council of EU leaders, where her longevity and economic clout give her authority unmatched by anyone else. Given the opportunity for face time, Varadkar would have been foolish to turn it down.

And in one of those deft diplomatic touches that have served the Government so well since the start of the Brexit process, officials assembled a number of people from the North and Border areas, people with expertise but also direct experience of the North’s tragic past, to speak with the German leader in a round-table forum. She was, participants said, enormously impressive, without a hint of falsity. She made no promises, and spoke warmly of their contributions afterwards.

She was also strongly supportive of Ireland, promising to redouble efforts to ensure an orderly exit by the British that does not threaten the peace process and the post-conflict arrangements across the Border.

Where the rhetoric elsewhere in Europe – including sometimes out of Dublin – is understandably exasperated with the British, Merkel sounded emollient and promised to work – “until the last hour . . . we’ll expend a lot of strength” – to smooth the British exit.

Nonetheless, though she gave little away in the post-meeting press conference, Merkel is clearly on manoeuvres. She wants to avoid a no-deal exit. And if there is one, she wants to limit the damage. It seems likely she will assert herself at next week’s emergency summit. When she does, she usually gets her way.

So this trip wasn’t about issuing instructions about the Border. For a start, despite the concerns expressed by Merkel at the recent European Council, that’s the commission’s job.

According to sources in Dublin who were briefed on the talks between the two leaders, Merkel seemed “reassured” by the Taoiseach’s presentation on the protecting of the single market. There was, said one source, “no great probing”, and the chancellor appears content to rely on the commission to work out a plan with the Government for what happens if there’s a no-deal. Her focus appears to be on avoiding that outcome. She declined to answer questions on a “speculative” no-deal outcome, of course. But at this stage, it’s hardly speculation.

Dublin has been dodging the question for longer. For months and months, the Government has refused to say what it would do on the Border if there was a no-deal crash-out – except to repeat a mantra endlessly: “We won’t be putting up a border.” In recent months, that became: “We won’t be putting up physical infrastructure on the Border.” Only in recent weeks, as the prospect of a crash-out, no-deal Brexit loomed, have Ministers acknowledged that there is a parallel obligation on Ireland to protect the EU’s single market. And it is really only in recent days that the Taoiseach and his Ministers have acknowledged that there may be a conflict between the two objectives.

Reconciling that conflict will, if it happens, be a matter of technical fixes – where the checks go, how intrusive they need to be and so on. But these can only stem from political direction. That is the level that Merkel operates at. The politicians decide. That’s one of the reasons it takes so long. Even so, time is now short, short indeed.