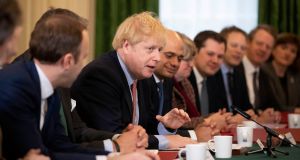 Boris Johnson spooked markets by putting the threat of a no-deal Brexit back on the table. Photograph: Matt Dunham/PA Wire

Boris Johnson spooked markets by putting the threat of a no-deal Brexit back on the table. His plan to change the law to ensure the transition phase in the UK’s divorce from the European Union is not extended past the end of 2020 triggered a sharp fall in the pound and a warning from the bloc to prepare for a new “cliff-edge situation.”

The pound erased all of its gains since an exit poll that predicted a Conservative majority in last week’s election, and UK-focused stocks fell by over 1 per cent, as the threat of no deal Brexit was revived.

The pound dropped by the most since July after the UK prime minister made end-2020 a hard deadline for a trade deal with the EU. The currency’s one-year implied volatility was headed for the biggest jump since May.

“The pound is right back where it was before the December 12 vote and the subsequent ‘Boris bounce’,” said Valentin Marinov, head of Group-of-10 currency strategy at Credit Agricole. “It is fitting that the main culprit for the reversal is PM Johnson himself with his potentially ill-advised decision to block any chance of extending the transition period beyond December 2020.”

Cabinet minister Michael Gove also said the next phase of Brexit negotiations on a free-trade deal will be concluded by the end of the transition period, which expires on December 31st, 2020.

“We’re going to make sure we get this deal done in time,” Mr Gove told the BBC on Tuesday, adding that the bloc has promised to conclude negotiations by the end of 2020. “We’ve seen before how deadlines can concentrate minds.”

But EU leaders have warned it’s highly unlikely negotiators can complete the kind of deal Mr Johnson wants in time, pointing out that Canada’s agreement with the EU – the model the UK prime minister refers to – took seven years to finalize.

Adding to the woes for markets, manufacturers across the UK saw output in the three months to December fall at the fastest rate since the financial crisis, according to the Confederation of British Industry.

And a sales warning from Unilever prompted investors to sell big consumer names.

For JPMorgan Chase and Co, the risk of a no-deal Brexit remains at an “uncomfortably high” 25 per cent following the election win.

Sterling had gained significant ground on hopes a strong Conservative majority would lead to a speedy resolution to the Brexit deadlock. The most bullish forecasts, which call for a rally to $1.40 or beyond, depend on a market-friendly exit from the EU, which now looks at risk with the return of Mr Johnson’s hard line negotiating strategy.

The bank’s economist Allan Monks wrote in a research note dated December 13th that, while Mr Johnson’s sturdy majority means “the indecision and domestic delays” of the past two years should be over, it also means the government is likely to take a forceful approach in the upcoming negotiations.

The domestically-skewed FTSE-250 stock index fell by as much as 1.7 per cent with declines for banks and retailers. The FTSE 100, home to a range of multinationals that benefit from a weaker pound, held steady.

The pan-European equities index fell 0.6 per cent after soaring to record highs in the previous session. The biggest weak spot was consumer goods giant Unilever . Its shares tumbled 6 per cent, on course for their biggest percentage drop since July 2015, after the company warned that 2019 sales would grow less than it had expected, citing tough trading conditions in West Africa and a slowdown in south Asia.

Europe’s personal and household goods sector fell 2.1 per cent, the most among regional subsectors.

Airbus rose 0.5 per cent after Boeing said it would suspend production of its 737 MAX jetliner in January. Shares in aircraft-parts maker Safran fell about 4 per cent. Ryanair, Air France and Lufthansa were all weaker as well. – Reuters/Bloomberg/PA