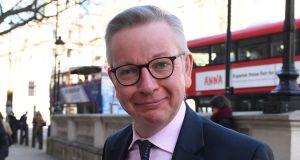 Britain has written to the European Commission to express concerns about “limited progress” in the implementation of parts of the Brexit withdrawal agreement.

The complaint concerns the rights of UK citizens living in the EU, and was expressed in a letter from cabinet office minister Michael Gove to commission vice-president Maros Sefcovic sent as a week of talks between negotiators on the future EU-UK relationship comes to a close.

The letter accuses EU member states of failing to provide resident British citizens with clear information about their rights and obligations, giving short deadlines to apply for the EU Settlement Scheme, having slow or unclear application procedures, and lacking support for vulnerable UK nationals.

“The themes highlighted above relate to individual member states. Nonetheless the withdrawal agreement places obligations on the EU as a whole,” the letter states.

The letter contrasts failures in member states with steps taken to accommodate EU citizens in Britain, where, it says, the government has set up a phone line, given 27 months for applications for settled status, and made available support for vulnerable EU citizens.

The criticism from the UK echoes past accusations by chief EU Brexit negotiator Michel Barnier, who has slammed London for failing to engage seriously with future relationship negotiations and has warned that implementation of the withdrawal agreement, particularly the development of checks for goods entering Northern Ireland, is vital for a deal to be reached in these talks.

A British government spokesman denied the letter was linked to the negotiations, and said it intended to set out London’s position ahead of a meeting by a joint EU-UK specialised committee on citizens’ rights next week.

“Citizens’ rights have always been a priority for the UK. We take our obligations to protect citizens’ rights very seriously, and expect the EU to do the same,” the spokesman said.

The European Commission this week published guidelines on citizens’ rights for member states, intended to help them implement the withdrawal agreement, which protects the status of both British citizens living in the EU and EU citizens living in Britain.

On Thursday, the British Irish Chamber of Commerce called on the London government to seek an immediate extension of the Brexit transition period to avoid a lurch to default trade terms in January, which it warned would “decimate” businesses when combined with the coronavirus pandemic.