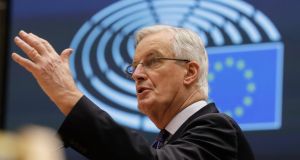 Michel Barnier has been told by the European fishing industry that his latest offer to the UK amounts to selling coastal communities “down the river” as negotiators continue to haggle in Brussels over a post-Brexit trade and security deal.

The EU and UK negotiating teams remain at loggerheads on the future rights of EU fishing fleets in British seas, with Downing Street warning there will not be a deal without a significant shift from Barnier in the coming hours.

The annual turnover from fish for UK vessels in British waters is about €850 million compared with €650 million by EU member states. The UK prime minister has rejected the latest EU offer of handing over 25 per cent of its catch by value - €162.5m a year - to UK vessels.

The UK insists that the EU needs to get closer to its demand for 60 per cent of the current catch being repatriated, worth about €390 million a year.

Downing Street also wants to restrict a phase-in period for the new arrangements to three years rather than the six or seven most recently proposed by Brussels.

But in a warning shot across Mr Barnier’s bows, Gerard van Balsfoort, the chairman of the European Fisheries Alliance, representing the industry in coastal states such as France, the Netherlands, Belgium and Spain, said the terms already offered would involve “unprecedented” and unacceptable cuts.

He said: “The shape of a deal, as currently stands, would give a huge blow to the European seafood sector which is made up more than 18,000 fishermen and 3,500 vessels with an annual turnover of €20.7 billion.

“Our industry is literally and metaphorically on the brink and in spite of repeated promises made, we are in the throes of being sold down the river with the offer made to the United Kingdom by the European commission. The more so when the fisheries negotiations with the UK are intended to start all over again after only six or seven years.”

Meanwhile, Minister for Foreign Affairs Simon Coveney has said it will be hard to reach a Brexit trade deal in the next 24 hours and the whole negotiation could collapse over fishing rights.

“I don’t see this being agreed easily in the next 24 hours. We may see a standoff over fish,” Mr Coveney was quoted as saying by the Sunday Times newspaper.

“It won’t surprise me if this issue collapses the whole negotiation. It certainly has the capacity to do it.”

Coveney added that he found it difficult to see the EU fishing states of Ireland, France, Belgium, Denmark and the Netherlands supporting an agreement that goes beyond the offer that is currently on the table.

Should the nine months of talks fail to produce an agreement on a trade and security deal, the UK’s waters would be entirely shut to EU vessels, unless some contingency arrangements could be negotiated.

But Mr Van Balsfoort said his members would prefer a no-deal outcome than the terms so far proposed by Mr Barnier. There are 11 days to go before the UK leaves the transition period, with or without a deal.

Mr Van Balsfoort said: “The one thing we wanted to avoid was a ‘no-deal’ situation in the interests of all our fishermen but the deal which is now being proposed is every bit as bad. We are looking at vicious and unprecedented cuts on a wide range of stocks including our pelagic, shellfish and whitefish sectors.

“This is galling and if the European commission doesn’t stand up for its fishermen and honour its written agreement made during the arduous Brexit negotiations, it could spell the death knell for large parts of an industry which has contributed so much to coastal communities across nine EU states. Our fishermen must be protected as they risk life and limb to provide fresh food in the most unforgiving environment on earth.”

The European parliament has set midnight on Sunday, central European time, as the deadline for agreement. MEPs have said they will not hold a vote of consent this year if a deal is not in place.

A deal could still be “provisionally applied” by the 27 EU member states, with parliament holding a vote in January, although the commission is loth to take that route.

The provisional application process could also take up to a week, due to the need for translation and scrutiny of the text in the EU capitals, leaving just a few days more of talking time before a no-deal outcome, for at least a short period in the event of a very late agreement, becomes unavoidable.

A UK government source said: “We need to get any deal right and based on terms which respect what the British people voted for. Unfortunately, the EU are still struggling to get the flexibility needed from member states and are continuing to make demands that are incompatible with our independence.

“We cannot accept a deal that doesn’t leave us in control of our own laws or waters. We’re continuing to try every possible path to an agreement, but without a substantial shift from the commission we will be leaving on WTO terms on December 31st.”