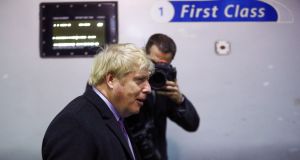 Boris Johnson has promised a sweeping legislative programme for the first 100 days of a majority Conservative government, including the biggest review of Britain’s defence, security and foreign policy since the end of the cold war.

Mr Johnson would introduce a new budget within days of Britain’s exit from the European Union at the end of January, mandate tougher sentences on violent criminals and make migrants pay more to use the National Health Service.

“This is the most important election in a generation – important because it will define if we go forward as a country or remain stuck, stalled, repeating the same arguments of the last three years with yet more damaging uncertainty. In just seven days’ time the British people will have to choose between a working majority government or yet another gridlocked hung parliament,” he said.

Mr Johnson said he would bring the Withdrawal Agreement Bill back to parliament before Christmas and pass all its stages early in the New Year to allow Britain to leave the EU on January 31st. He claimed that, after that, parliament would be able to focus on improving public services and delivering on voters’ priorities.

“But if the Conservatives don’t get a majority, then on Friday 13th we will have the nightmare of a hung parliament with Jeremy Corbyn as prime minister propped up by Nicola Sturgeon’s SNP. Next year will be Groundhog Day in parliament with MPs arguing every day about the referendum and businesses and families left in limbo, unable to plan their futures,” he said.

“With Corbyn, 2020 will be the year of two chaotic referendums on Brexit and Scottish independence creating more uncertainty. Nothing else will happen. I believe the British people will choose to go forwards and not return to the nightmare of a broken hung parliament.”

Earlier, Labour’s shadow chancellor John McDonnell said the Conservatives had presided over a massive rise in the cost of living for British households during their nine years in office. He said Labour’s policies could save families more than £6,700 (€7,900) a year and he promised to wipe out the poverty portrayed in a Channel 4 Dispatches documentary this week.

“The precarious insecure existence so many families face in our society means that all it takes is one mishap, an illness, a death or family breakdown and families are pushed over the edge. Watching children showing us that they had no food in their home, going to bed cold, wearing their clothes in bed to keep warm, raiding their piggy bank to find some money for their mum to pay the meter for the electricity to boil the water for their hot water bottles. Parents struggling with stress and mental health problems,” he said.

“What Dispatches showed was what happens when a family is forced to rely upon a safety net that in reality barely exists. We don’t believe it’s enough to offer people a hand up out of poverty. We want to abolish poverty.”