Johnson calls for Canada-style EU deal with no binding rules 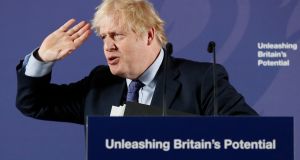 Boris Johnson giving a speech at the Old Naval College in Greenwich on Monday. “In one field after another, Britain is far ahead,” he said. Photograph: Frank Augstein/Getty Images

Boris Johnson has called on the European Union to give Britain a Canada-style free trade agreement, with zero-tariff, zero-quota access to the single market, without any binding commitment to fair competition. The prime minister said Britain would maintain its current standards on state aid, environmental and labour rights but saw no reason to make such a commitment in a treaty.

“There is no need for a free trade agreement to involve accepting EU rules on competition policy, subsidies, social protection, the environment, or anything similar any more than the EU should be obliged to accept UK rules,” he said.

“I dispel the absurd caricature of Britain as a nation bent on the slash and burn of workers’ rights and environmental protection, as if we are saved from Dickensian squalor only by enlightened EU regulation, as if it was only thanks to Brussels that we are not preparing to send children back up chimneys. In one field after another, Britain is far ahead.”

Mr Johnson was making his first major speech since Britain left the EU, to an audience including foreign diplomats at the Old Royal Naval College in Greenwich. He promised that Britain would champion global free trade, seeking trade deals first with the EU, the United States and Commonwealth countries.

He insisted that the choice was not between a Canada-style deal with the EU and no deal, because Britain has already agreed a deal in the form of the withdrawal agreement.

“The question is whether we agree a trading relationship with the EU comparable to Canada’s – or more like Australia’s. And I have no doubt that in either case the UK will prosper,” he said.

“And of course our new relationship with our closest neighbours will range far beyond trade. We will seek a pragmatic agreement on security, on protecting our citizens without trespassing on the autonomy of our respective legal systems. I hope that we can reach an agreement on aviation, allowing cheap flights to continue. We are ready to consider an agreement on fisheries, but it must reflect the fact that the UK will be an independent coastal state at the end of this year 2020, controlling our own waters.”

Australia has no free trade agreement with the EU and following its model would mean tariffs and quotas on trade in goods between Britain and the European Union.

Political journalists walked out of a briefing with officials on the trade talks in Downing Street on Monday afternoon after Mr Johnson’s aides excluded journalists from some publications, including some which have been critical of the government. It is not unusual for Downing Street to give political briefings to selected journalists but there has not been such political selection for briefings with civil servants until now.

Last month, Mr Johnson unilaterally moved the twice-daily briefings for political journalists from the Palace of Westminster to Downing Street. The government is boycotting a number of news and current affairs programmes, including the BBC’s Newsnight and Today.