Speaking during a visit to Washington, British foreign secretary Dominic Raab has accused the EU of "politicising" the Belfast Agreement. 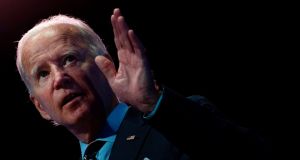 Mr Biden, who is an Irish-American, is currently leading in polls as he seeks to become the 46th president of the United States. Photograph: Jim Watson/AFP via Getty Images

US presidential candidate Joe Biden has warned Britain that the Belfast Agreement cannot become “a casualty of Brexit, ” as he stressed that a trade deal with the United States is contingent upon the agreement being upheld.

In his first comments on the deepening controversy over the British government’s move to introduce domestic legislation that overrides some of the commitments made in the withdrawal agreement with the European Union last year, Mr Biden warned.

“We can’t allow the Good Friday Agreement that brought peace to Northern Ireland to become a casualty of Brexit. Any trade deal between the US and UK must be contingent upon respect for the Agreement and preventing the return of a hard border. Period.”

His intervention on Twitter is likely to put further pressure on the government of Boris Johnson over the controversial move, amid alarm on Capitol Hill about the latest Brexit developments and their implications for Northern Ireland.

Mr Biden, who is an Irish-American, is currently leading in polls as he seeks to become the 46th president of the United States.

His words follow warnings by senior congressional figures that a US-UK trade deal will not happen if the Belfast Agreement is undermined.

In a statement after the meeting, House Speaker Nancy Pelosi said she welcomed the assurances by British foreign secretary Dominic Raab, but warned that there would be no chance of a trade deal with the US if the Good Friday accord is undermined by Brexit.

“If the UK violates its international agreements and Brexit undermines the Good Friday accord, there will be absolutely no chance of a US-UK trade agreement passing the Congress. The Good Friday Agreement is valued by the American people and will continue to be proudly defended in the United States Congress,” she said.

“Whatever form it takes, Brexit cannot be allowed to imperil the Good Friday Agreement - the stability brought by the seamless border between the Irish Republic and Northern Ireland.”

We can’t allow the Good Friday Agreement that brought peace to Northern Ireland to become a casualty of Brexit.

Any trade deal between the U.S. and U.K. must be contingent upon respect for the Agreement and preventing the return of a hard border. Period. https://t.co/Ecu9jPrcHL

Earlier Mr Raab accused the European Union of politicising the issue of the Belfast Agreement, as he told senior political figures on Capitol Hill that there would be no return to a hard border in Ireland.

Speaking following a meeting with secretary of state Mike Pompeo, Mr Raab said that the threat to the Belfast Agreement as it is reflected in the Northern Ireland protocol of the Brexit withdrawal agreement “has come from the EU’s politicisation of the issue”. He added that “what we cannot have is the EU seeking to erect a regulatory border down the Irish Sea between Northern Ireland and Britain”.

Mr Raab also reiterated that message during a meeting with Ms Pelosi and congressman Richard Neal, the chair of the Ways and Means committee, which has the final say over US trade deals.

The British government has introduced legislation – the UK internal market Bill – which could give ministers the power to override parts of the Northern Ireland protocol in the Brexit withdrawal agreement it has signed with the EU.

Speaking to The Irish Times after the meeting with Mr Raab, which took place in Ms Pelosi’s office on Capitol Hill, Mr Neal said he and Ms Pelosi had been assured that there would be no return to a hard border in Ireland.

“The challenge is – we were assured nine months ago of this,” Mr Neal said. “We were looking for clarification that under no circumstance will there be a return to the border in Northern Ireland. We were told that this will not happen.”

The meeting between Mr Raab and the two senior Democrats on Capitol Hill was scheduled late last week after Ms Pelosi issued a strongly worded warning to Britain that there was “no chance” of a US-UK trade deal being agreed if the Belfast agreement was jeopardised.

While Ms Pelosi repeated that message on Thursday during the meeting with Mr Raab in her office, earlier in the day, Mr Pompeo struck an upbeat tone about the status of the US-US trade negotiations, predicting “a successful conclusion before too long”.

“The fourth round started now a little over a week ago, and I think our teams are working diligently to make good progress on that important mission,” he said. Mr Pompeo and members of the Trump administration are strongly supportive of Brexit, though final sign-off on a deal must be given by Congress.

Mr Pompeo also said he trusted Britain when it comes to upholding the Belfast Agreement following the introduction of the UK internal market Bill.

“I am confident they’ll get it right,” he said. “We’ve made clear our view of the importance of the Good Friday [Belfast] Agreements. We know the complexity of the situation. We’ve done what we can to provide assistance where we can. In the end, this will be a set of decisions with respect to this that the United Kingdom makes, and [I] have great confidence that they will get this right in a way that treats everyone fairly and gets a good outcome for what it was the people of the United Kingdom voted for now several years back.”

Mr Raab’s meetings in Washington took place a day after four senior members of Congress, including the outgoing head of the foreign affairs committee Eliot Engel, warned Britain not to undermine the Belfast Agreement.

In a letter to prime minister Boris Johnson, the bipartisan group said that “we stand with millions of Americans who support the achievement of the Good Friday Agreement and feel personally invested in ensuring peace in Northern Ireland.”

“We urge you to abandon any and all legally questionable and unfair efforts to flout the Northern Ireland protocol of the withdrawal agreement and look to ensure that Brexit negotiations do not undermine the decades of progress to bring peace to Northern Ireland and future options for the bilateral relationship between our two countries,” they wrote.