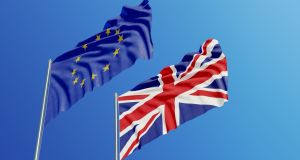 Reunification of Ireland and the future status of Scotland are issues “definitely on the table” as a result of Brexit, the former head of the UK Foreign Office and Diplomatic Service has said.

Simon Fraser, chief policy adviser to two British foreign secretaries, William Hague and Philip Hammond, said a decision to pull out of the EU complicates the union of Britain and Northern Ireland.

“Brexit does complicate, in my view, the future status of both Scotland and Northern Ireland, if you look at it from the British aspect,” he said.

“I think these questions are definitely on the table in terms of the future of our union.”

In relation to the North“that does raise the question of the future of Northern Ireland in its relationship with the Republic”, he added.

The former senior civil servant, who ran the UK’s embassies worldwide and sat on the National Security Council, was responding to calls by Sinn Féin leader Mary Lou McDonald for the EU to “take a stand” on Irish reunification as it did with the reunification of Germany.

In an interview with BBC’s Newsnight programme, Ms McDonald — who has declared she may be the next taoiseach as coalition talks get under way – said her party would be “making asks of the European system in terms of long-term Irish interests and on the issue of partition”.

Mr Fraser said the consequence of no hard border in Ireland under the withdrawal agreement was to “accept some sort of border between Great Britain and Northern Ireland.”

“The question is what is that going to be… that’s the conundrum that has yet to be resolved,” he added.

Mr Fraser also suggested Britain faces being outmanoeuvred in post-Brexit trade deal talks because it doesn’t have the expertise for such negotiations compared to other countries.

Member states of the EU have their trade negotiations done by the European Commission, he pointed out.

“I myself was there for several years doing that,” he said.

“It is true that we don’t have the national capacity that say the Americans or the Japanese or the European Commission have.