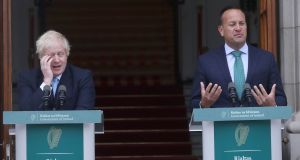 British prime minister Boris Johnson with Leo Varadkar, then the taoiseach and now Tánaiste, at Government Buildings during the former’s visit to Dublin in September 2019. Mr Varadkar has said Ireland had been saved from “what could have been a very rough Brexit and now is going to be a relatively soft one”, after the UK and EU reached a post-Brexit trade agreement. File photograph: Niall Carson/PA Wire

Tánaiste Leo Varadkar said the settlement around fishing rights reached today between the UK and EU was “always going to be the most difficult aspect of this deal”.

Speaking outside Government Buildings on Thursday evening after crunch UK-EU talks to avert a no-deal Brexit scenario ended in success on Christmas Eve, he said the agreement was “as good a deal as could be negotiated in the circumstances for fisheries”.

“One thing we’re going to have to do is negotiate very hard in the New Year to make sure that there’s fair burden-sharing across Europe, that Irish fishermen aren’t disproportionately affected,” he said.

“Bear in mind we have been taking 35 per cent of the fish that we land, we’ve been taking it from British waters for a very long time now, when Britain left the European Union they took their waters with them,” he said.

Years of hard work and diplomacy have protected Ireland from all of that. Thank you to our friends in Europe and our spectacular civil servants in Dublin and Brussels

We have best #Brexit deal possible after 4 years of tough protracted negotiations. Deal builds on Irish Protocol negotiated in The Wirral which guarantees the common travel area and no hard border in Ireland. A sad but mementous day. Thank you @MichelBarnier and @vonderleyen

It will come as a relief to our farmers, industry and exporters. No tariffs and no quotas. For aviation & energy it is close to the status quo and for transport/haulage there are special arrangements around cabotage.

Level playing field secured. UK will have to match EU standards to maintain access to full EU market. Hopefully deal can be ratified by European Parliament by NY. But Brexit will never be ‘done’. Will be need for future agreements & disputes will arise that have to be resolved

“So what we were facing was losing 80 per cent of that quota, it looks now like it’s going to be more like 25 per cent, and we will retain access to UK waters for at least another five and a half years,” he said.

Ireland would be negotiating to receive “a decent portion” of a €5 billion fund in the EU budget allocated to respond to the impacts of Brexit, which in part would be put towards supporting industries such as fisheries, he said.

The Fine Gael leader said he felt any potential return of the UK to the EU in the future was “unlikely”, but added the “door is always open”.

“I think now they’ve decided to leave, they’re gone and we need to accept that, and try to strengthen bilateral relations,” he said.

Despite the threat of a no-deal Brexit being avoided, Irish businesses would still face extra customs, checks and bureaucracy in trading with the UK, he said.

Ireland had been saved from “what could have been a very rough Brexit and now is going to be a relatively soft one”, he added.