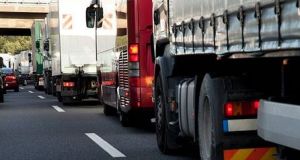 Eugene Drennan, president of the Irish Road Haulage Association, says two-day delays at Dover could add “the best part of week” to a return journey between Ireland and Italy. Photograph: Getty Images

Irish hauliers say they will be “between a rock and a hard place” post-Brexit after the UK government’s warning of possible queues of 7,000 lorries in the port of Dover and two-day delays to cross into continental Europe.

Michael Gove, the Westminster cabinet office minister responsible for Brexit planning, told the House of Commons on Wednesday that in a “reasonable worst-case scenario” there could be thousands of lorries waiting in Dover to cross the English Channel after January 1st.

He told MPs that lorry drivers crossing county boundaries into Kent after the end of the Brexit transition period would need a “Kent access permit” or face police action.

He said the permit system, which would be enforced by number plate recognition, was necessary to reduce congestion.

Eugene Drennan, president of the Irish Road Haulage Association, said two-day delays at Dover could add “the best part of week” to a return journey for a lorry driver making deliveries between Ireland and markets in the Netherlands and Italy.

“The writing is on the wall that we have to alleviate the pressure on Irish hauliers going through England to continental Europe,” said Mr Drennan. “Ireland Inc needs certainty and surety of timing that goods can get to their markets in Europe on time.”

Mr Drennan said it did not matter that an agreement had been reached with the UK to fast-track EU-bound Irish lorries through customs if there were lengthy delays in Dover.

Aidan Flynn, general manager of Freight Transport Association Ireland, said it was “a bit rich” of Mr Gove to be warning of “reasonable worst-case scenario” planning when the UK should be concentrating on a trade deal with the EU to avoid a crash-out Brexit.

He said Irish transport companies were “between a rock and a hard place” on the use of the UK landbridge because nobody knew how long the delays at Dover would be after the transition period following the UK’s exit from the EU ends on December 31st.

“Two-day delays at Dover make it very difficult for Irish business. We are impacted more here in Ireland, particularly if the UK aren’t prepared,” he said.

The value of trade crossing the landbridge was €18 billion in exports and €3 billion in imports in 2016, according to a report on the route by the Irish Maritime Development Office.

More than 80 per cent of the one million “roll-on, roll-off” lorries using Irish ports every year go through UK ports, with the remainder going on direct routes to continental Europe.