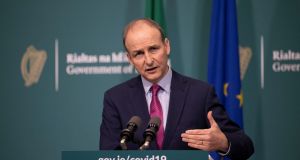 Taoiseach says while the deal reached between the EU-UK would disappoint fishermen, it is was still better than no deal. Photograph: PA

Taoiseach Micheál Martin said the Irish fishing industry will be disappointed by the EU-UK trade deal, which he called “the least bad version of Brexit possible.”

Reacting to the agreement concluded between EU and UK negotiators on Christmas Eve after four years of negotiations, Mr Martin said “there was no such thing as a ‘good Brexit’ for Ireland” but that the Government had worked hard “to minimise the negative consequences.”

“I believe the agreement reached today is the least bad version of Brexit possible, given current circumstances,” he said.

“I know that, more than others, our fishing communities will be disappointed with the outcome. But compared with the prospect of ‘no deal’, which would have seen them completely excluded from British waters, the negotiators have worked to minimise the damage,” he said.

“The Government will work to ensure that the sector and the coastal communities that depend on it are supported through the period ahead.”

Negotiations went down to the wire to find an agreement on fisheries, with the two sides locked in talks in Brussels working “line by line and fish by fish”, an EU official said.

Ultimately, the EU agreed to cede 25 per cent of the value of the roughly €650 million in fish EU boats catch in British waters each year, for a period of 5.5 years.

After that, access will be set in annual negotiations with the UK, with a “presumption” that access will be given, according to an EU official. If the two sides cannot come to an agreement, the UK must continue to offer access provisionally for three months.

It was disagreement about how the value of the 25 per cent should be measured that caused the last minute delay in announcing the deal, according to the Commission.

It was finally reached at 1.44pm (Irish time) on Christmas Eve.

The UK had originally sought to take back 80 per cent over a much shorter period.

The Irish fishing industry has said that it “stands to lose out dramatically” from the agreement.

The Taoiseach said that the Government would “consider the detail of the text very carefully” but he believed the deal represents “a good compromise and balanced outcome.”

The agreement that there would be no tariffs and quotas on trade between the EU and the UK, including on fish, was “a very significant achievement,” he said.

He warned that there were “big changes still imminent for our businesses and our citizens” with new customs and regulatory formalities, procedures and checks from the start of next month.

‘He urged “everyone to get informed and to be ready for what lies ahead.”

“The minute that Brexit was announced we could see difficulties and challenges for fishing industry across Europe in particular Ireland given the access we have to British waters in terms mackerel and there has been some concessions made.

“But we have negotiated very hard to minimise the damage to the Irish fishing industry and a No deal would have been ruinous for the industry so we had to avoid that but in addition the government stands ready to support our fishing industry and more than that we want to support the communities that its support and sustain so there will be a lot of economic support for the fishing community as a result of this deal.”

Minister for Foreign Affairs Simon Coveney said the deal covering so many areas was “positive” but there was “still a lot of disruption coming” when Brexit takes effect on January 1st.

Sinn Féin president Mary Lou McDonald said that while the deal was a relief, people should be “under no illusions there is no good Brexit for Ireland, north and south” and that the “full consequences of this are as yet unknown.”

“We need to look at the detail in this document and test it against what had been set out in principle in the wider agreement, the Irish protocol and also against the Good Friday Agreement,” she said.

“In the immediate term, we need to ensure that there is full support for those sectors that will struggle despite today’s deal and we need to look at how the north’s voice can be heard at EU level in the coming years.”

The fishing industry reacted angrily to the agreement. One of the industry’s biggest groups, the Killybegs Fishermen’s Organisation, said that the agreement “fails Irish fishermen.”

The group demanded compensation by way of the transfer of the quota of the mackerel - one of the sector’s most profitable stocks - caught by other EU member states.

The Irish fishing industry currently catches 60 per cent of its mackerel, one of the most profitable catches for the Donegal fishing sector in particular, in UK waters.

The KFO said the agreement showed “the duplicitous nature of these protracted negotiations and expressed dismay that repeated guarantees have “effectively been shredded.”

Sean O’Donoghue, chief executive of the KFO, said that, having secured written commitments in official documents relating to the fishing sector, four and a half years of agreements “had for all intents and purposes, been dishonoured by the negotiators.”

“We cannot stand idly by and allow decades of investment in developing a successful enterprise to be sacrificed by the shape of this very poor deal,” he said.

“In spite of a seismic effort to redress the imbalance of the proposed deal in recent days, not enough has changed and our highly-developed mackerel fishery stands to lose out dramatically.”

Mr O’Donoghue said that the Irish fishing industry would be “seeking compensation from our EU colleagues to put right this previous wrong.”

“We won’t accept this. Moreover, we fully expect the Irish Government to deliver the requisite compensation in the form of transfer of mackerel quota from the other EU coastal states which pro rata, have seen a much less severe impact on their respective mackerel fisheries,” he said.

The Irish Farmers’ Association said the post-Brexit trade deal was “a relief” but that there was “little to cheer about” given the “significant difficulties” ahead for the Irish agri-food sector.

“The work of the two sides to avoid a ‘no deal’ has to be acknowledged, particularly after four years of damaging uncertainty which had an impact on farm incomes. However, the eventual outcome leaves little reason to celebrate,” said IFA president Tim Cullinan.

Irish farmers have “real concerns” about how non-tariff barriers will affect the ability to keep trade moving and that the scenes of lorries backed up and freight delayed at the port of Dover in southern England from France’s Covid-19 ban on travel this week “does not bode well,” he said.

“Green lanes have been implemented previously for food exports. These must be prioritised after January 1st,” he said.

The Government must have the €400 million support fund and the EU’s €5 billion Brexit adjustment fund available for Irish farmers early in the new year, said Mr Cullinan.

He expressed concerns about the longer term effect of food imports into the UK from other counties such as Australia, New Zealand and South American countries on Irish exports to Britain.

“The danger is that the deal isn’t robust enough to ensure the regulations of the single market are adhered to,” he said.

The “level playing field” provisions built into the agreement by the EU to ensure food standards were not undercut by the UK in future “must stop any race to the bottom, he said.

“New arrangements with the UK will also impact on service trade and there is much that still remains to be clarified,” he said.

The protracted negotiations had left little time for businesses to adjust to the new arrangements and Ibec would be working to ensure that “supply chains adapt as quickly as possible,” he said.

Paul Kelly, director of Food Drink Ireland, an Ibec group, said that the agreement avoided “disastrous tariffs” but that deal was “still very much a hard Brexit.”

Food and drink firms would face substantial non-tariff barriers to trade with Britain with customs, sanitary checks and other food safety requirements in a “few days’ time”, he said.

He warned that this would lead to “substantial ongoing costs which will have to be absorbed not just by the food supply chain but by consumers as well.”

Reaching an agreement to ease and facilitate customs and food, animal and plant sanitation checks at borders “should now be a priority for both sides,” said Mr Kelly.

The Taoiseach said that while he respected the UK’s decision to leave the EU, he “very much” regretted the decision but wished the UK well “in this new chapter in its history.”

“Our people, our histories and our economies are deeply entwined. As we move into the next phase of our relationship, we will work together to ensure that it remains deep and strong,” said the Taoiseach.