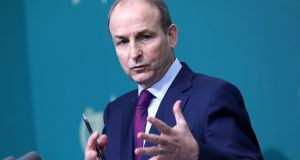 Taoiseach Micheál Martin: ‘No country has more to gain than we have from positive and stable European Union-United Kingdom relations.’ Photograph: Julien Behal/Handout/EPA

Ireland’s relationship with Britain “will always be close and special”, despite the UK’s departure from the EU, the Taoiseach has said.

“The ties between us are so extensive and so strong,” Micheál Martin said. “No country has more to gain than we have from positive and stable European Union-United Kingdom relations.”

In a Dáil debate supporting the post-Brexit deal agreed between the EU and the UK Mr Martin said he regretted but accepted Britain’s choice to leave the EU.

But he pointed out that the Trade and Co-operation Agreement provides “the essential stability which we will continue to build on in the years to come”.

He said the State has spent more than €1 billion dealing with Brexit-related issues since the UK voted in the referendum in 2016 to leave the EU.

“We are now experiencing the reality of the new arrangements,” he said adding that import and export declarations would increase twelvefold from 1.6 million a year to more than 20 million.

“The fishing sector is particularly affected by the compromises on fish quotas that were necessary to secure a deal,” he acknowledged. “Therefore, I warmly welcome the European Commission’s proposal in recent days for an allocation of over €1 billion to Ireland from the Brexit adjustment reserve.”

Tánaiste Leo Varadkar said he believed Ireland had achieved its aims through “hard work and careful diplomacy and alliance building” in ensuring, no hard border, with checks at sea ports and airports instead, that the all-island economy would not be damaged and that the Good Friday Agreement would be respected.

He added: “Absent Britain, Ireland can become a bridge between the US and the EU to help rebuild the Atlantic alliance, particularly now as a new Administration takes office there.”

Minister for Foreign Affairs Simon Coveney said Ireland “must collectively deepen our alliances and friendships with our fellow member states,” build a thriving, sustainable economic model and “re-invent our relationship with our closest neighbour, the United Kingdom, and the Government will be focused on that as well as the EU challenges we will face in the future”.

Mr Coveney failed in his appeal to Sinn Féin not to introduce an amendment calling for the Government to urgently engage with the European Commission and EU member state to renegotiate the Common Fisheries Policy.

The amendment, introduced because of the loss of 15 per cent of the Irish quota worth about €43 million to the fishing industry was rejected by 27 votes to 18.

Mr Coveney who said they were working hard to ensure a fair burden sharing approach to fisheries, said the amendment “distracts from the core message” of unity in supporting the deal.

Sinn Féin Wicklow TD Johnny Brady said however “Ireland and Germany are set to face the worst hits to their fresh fishing industries” with both facing a 15 per cent cut in quotas.

“We have already witnessed Irish fishing vessels being prevented from fishing by the British Navy in what are clearly Irish waters, even if Fine Gael would have us surrender these waters to the British, as it has attempted to do under the 2013 agreement with the British, one that has not been ratified by the Dáil. The Government needs to sort this mess out and to defend our fishing rights.”

Independent TD Cathal Berry said it was “very, very sad” that the UK had left the EU.

“I would like to wish my British friends the very best for the future but I hope that in whole or in part, they will return to the European family. I wish them ‘so long’ rather than ‘goodbye’.”