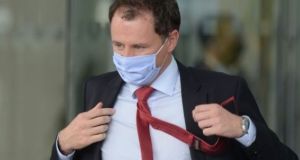 Minister for the Marine Charlie McConalogue said the quota loss for other member states was “considerably less” than that faced by Ireland. File photograph: Alan Betson

EU member states have not “adequately respected” the principle of burdensharing in the loss of fish quotas post-Brexit and Ireland has been disproportionately affected, according to Minister for the Marine Charlie McConalogue.

“We are not at all happy in relation to the additional burden we are taking and it is something I will be taking every opportunity to try and address,” Mr McConalogue told the Oireachtas Committee on Agriculture, Food and the Marine.

At the meeting, conducted remotely, the fisheries sector warned of up to one in four jobs being lost around the coast, the closure of processing plants and the devastation of coastal communities in the deal where Ireland has lost 15 per cent of its fish quota at a cost of €43 million. The Minister acknowledged that the quota loss for other member states is “considerably less”.

Ireland will lost 26 per cent of its mackerel quota by 2025, 14 per cent of prawns, with further substantial reductions in whitefish stocks including 23 per cent of haddock and 20 per cent of monkfish.

One in four people around the coast would lose their jobs “not because stocks are in poor condition, not because the fish aren’t in our waters but because we had to give it away for the benefit of others”, he said.

Chief executive of the Killybegs Fishermen’s Organisation Seán O’Donoghue said Ireland should be losing €21 million at most in fish quota, not €43 million, which was far more quota than the eight other coastal EU states.

The Minister said that at a meeting on Thursday with EU negotiator Michel Barnier, EU Fisheries Commissioner Virginijus Sinkevicius and ministers from the eight fisheries member states, he “strongly expressed my disappointment that the principle of burden sharing within the EU Member States has not been adequately respected”.

Ireland provides “rich fishing grounds for EU Member States and our Exclusive Economic Zone provides spawning and nursery grounds on many of the core stocks”, he added.

“I made clear that the inequitable relative contribution of quota share by Ireland is contributing to a strong sense of grievance within our fishing industry and indeed more broadly. I pushed strongly that a mechanism must be found within the EU Commission and relevant Member States to find solutions.”

When Donegal Independent TD Thomas Pringle asked about the response at the meeting to his comments, Mr McConalogue said that no one “is expecting other states to be coming forward to offer their fish but that is the battle” they faced, and he would be raising the issue again at Monday’s EU fisheries council and at every opportunity.

“We are at one with the fishing sector that the outcome does not reflect the principle of burden sharing.”

The Minister was pressed by a number of TDs about the composition of the taskforce he planned to establish. Mr McConalogue said he would consider proposals from the committee. But it was not just the fishing catch involved but the processing sector and employment in spin-off areas including the boat sector and engineering as well as the local economy.

Sinn Féin Donegal TD Pádraig Mac Lochlainn, who is also a member of Good Friday Agreement committee, said that “fishers on the island are being pitted against each other” and they did not want to be divided by this. He called for all parties and organisations to be united in a call for what they wanted, which was a better deal.