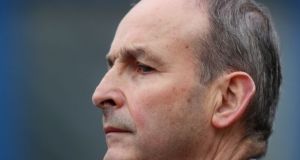 Taoiseach Micheál Martin has said he and British prime minister Boris Johnson are determined to put in new arrangements this year that will “renew and reboot” the relationship between Ireland and the United Kingdom in the wake of Brexit.

In a strong declaration of future strategic directions, the Taoiseach also strongly reinforced his view that Ireland’s future is bound with a more strongly integrated European Union, declaring “The EU is our home”.

Mr Martin said it was really important for both governments to work to redefine their close relationship, now that the UK was no longer a member of the European Union.

In a a keynote address delivered at a webinar hosted by the Institute of International and European Affairs, Mr Martin said he got a strong sense Mr Johnson was fully committed to doing so.

“The UK will always be a close partner. We must renew and strengthen a relationship which for nearly half a century, involved a shared structure of debates, legislation and so much more.

He said he was committed to putting arrangements in place in 2021 to underpin the next chapter.

“We are committed to working together to develop an ambitious new agenda to reset and refresh our cooperation in the post-Brexit context.

He said enhancing connectivity and tackling climate change were two areas where a joint approach would work.

“We need to set up structures for regular meetings at heads of Government, Ministerial and senior official levels.”

He added: “We must not become strangers because we miss the deep daily connections we had in the European Union.”

Asked during a questions and answers session at the end, was Mr Johnson as serious on this point, he replied: “I do get the sense. Governments are very much focused on the Covid emergency. The prime minister and I were in contact about this and the need to push forward with rebooting and resetting the Irish and UK relationship.

“The relations are warm. There will be challenges. There is a good foundation there.”

Mr Martin also focused on the relationship with the US during the course of his speech, now that a new president, Joe Biden, is about to begin his term of office.

“In Ireland we feel a particular affinity, given that Joe Biden has been a stalwart friend of Ireland throughout his long and decorated history of public service.

“In my conversation with him in the days after his victory it was clear that he is passionate about both his Irish heritage and the idea of Ireland as a constructive friend.

“I think we must also recognise the election of Kamal Harris as vice-president as a moment of tremendous significance and a political milestone.”

Referring to the global political situation, he said: “These are historic times and they demand of us that we step up and accept our part.

“The fundamentals of democracy are under attack in many places. We are confronted with a cynical strategy of division and misinformation,” he said.

“The appalling events of last week in Washington are part of a wider and more complicated series of urgent challenges.”

Asked if he was going to travel to the US for the shamrock ceremony in March, the Taoiseach said that decision would be based on the prevailing situation with Covid-19.

He said the fundamental requirement was democracy based on a strong rules-based system.

On the challenges posed by Covid he said: “We are at a moment balanced between deep danger and great hope. Just as they have done in the past for deadly diseases like polio and smallpox, it is through vaccination that we will be able to put this terrible virus behind us.”

“Our hospitals are experiencing their most terrible week of the pandemic so far. The scale and pace of the increase in cases which we experienced has been well beyond anything predicted.”

He said Ireland was now in “an bhearna bhaol” (the gap of danger) but the vaccinations did provide hope.

Turning to Europe, Mr Martin described the government as “unequivocally Euro-positive” and pledged Ireland to work towards increased European cooperation and integration, including on foreign policy. He claimed as a “false idea” the assertion that such common policies compromised sovereignty. He claimed they enabled sovereignty.

“The EU is Ireland’s home,” he said. “The picture of what life can be like without those benefits is also beginning to be realised.”.

He said the reality of Brexit required the management of very “damaging developments”.

“There never was such a thing as a ‘good Brexit’ for Ireland. We are working hard to minimise the negative consequences. I believe the agreement reached is the least bad version of Brexit, given the political circumstances.

Speaking about Brexit earlier on Friday the Tánaiste Leo Varadkar said “there are a lot of teething problems at the moment. A lot of it is down to the reality of the fact that Britain has left the single market and the customs union. When they were in the single market sending a package to Birmingham was as as easy as sending a package to Berlin or Ballina. It’s a bit more like sending something to Turkey, or Russia or Canada or America now. It is more complicated. That involves cheques and paperwork. There is no fix to that. There is no workaround. There is no set of easements or light-touch regulations that gets around that.

“This is something of which transport companies, retail and wholesale need to grasp the new reality.”