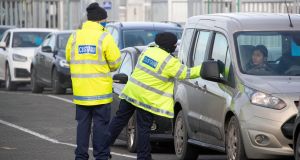 There will be an increased policing presence in the Border region over coming days with additional patrols and roving checkpoints planned as Brexit takes effect, An Garda Síochána has said.

No gardaí will be posted on the Border and there will be no permanent checkpoints, Superintendent Liam Geraghty said at a briefing on preparations for the UK’s exit from the EU.

“There are no very specific concerns or specific intelligence that we have in particular but we are very conscious that any change that will come into place that has the potential for organised crime groups to try to take advantage of that,” Supt Geraghty said at a briefing at Dublin Port.

There would be additional checks on vehicles coming across the Border for Garda immigration checks on people possibly coming from outside the Common Travel Area with the UK, he said.

The Revenue Commissioners, the Departments of Agriculture and Transport, and the Garda have warned of delays at Dublin Port, the country’s busiest port, in the coming days as a result of the UK’s effective departure from the EU customs union and single market at 11pm on Thursday.

Eddie Burke, an official at the Department of Transport’s Brexit unit, said he expected January 1st and this weekend to be “relatively quiet”, but for traffic to increase from Monday.

Gerry Harrahill, director general of the Revenue’s customs division, said the UK becoming a “third country” to the EU at 11pm on Thursday represented “the biggest change for business and for trade probably since we joined the European Economic Community some 47 years ago”.

This would create “significant challenges” for traders, Government departments, State agencies and regulators, and there would be a “new norm” of customs procedures, he said.

“Change is happening. Things cannot and will not stay the same. Businesses need to understand the new reality and be able to engage with that reality,” he said.

Traders with goods being transported to and from Britain that are stopped for a customs, agricultural or food safety checks “should expect that this will take time”.

“You cannot simply drive off a ferry that arrives from the UK and leave the port in a way that you do today. That is an unavoidable new feature of trade with Britain,” he added.

About 1.2 million road freight trailers pass through Dublin Port every year with the bulk of this traffic bound for Britain, including 150,000 heading to mainland Europe.

An estimated 410,000 trailers come into the port from Britain every year with an estimated 170,000 that could be subject to EU sanitary and phytosanitary (SPS) checks on plant- and animal-based food, live animals and plants that will now be required on imports from Britain.

The State has hired an additional 1,500 staff to deal with the customs, agricultural and food safety checks and inspections on goods arriving from Britain from Friday.

State agencies will be working around-the-clock shifts and have new technology in place to try to clear goods arriving in on lorries as quickly as possible, Mr Harrahill said.

Hazel Sheridan, head of the Department of Agriculture’s import control division, urged businesses involved in importing live animals, animal products, plant or plant products to contact the department if they had not already done so to prepare for the border controls.

She was unable to say the number of affected businesses which still had not yet engaged because they have never before had to register for the checks with UK trade being seamless.

“We just don’t know how many are out there,” she said.

Physical checks on the relevant products ranged from less than 1 per cent for pet food imported from the UK to 100 per cent of all live animal and second-hand farm machinery imports.

“The reality is that queues that had been at borders before the single market was created will now unfortunately reappear at the border between the UK and the European Union, ” she said.

She warned that importers who do not have the correct documentation required at the border such as veterinary or plan health inspectors “will face long delays”.

“The time to act is now. This change is coming. People need to be prepared,” she said.