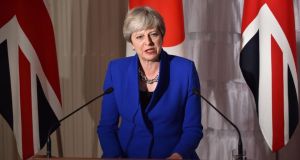 Observers of the Brexit negotiations generally fall into two camps. On the one hand there are those who, with some impatience, claim that all we are observing is a negotiation.

By definition, we don’t know what is really going on; all that we can actually witness is early-stage posturing ahead of a traditional 11th-hour compromise deal agreed by exhausted heads of state in the early hours of a summit some time next year.

Typically, the commentators who argue in this way are Brexiteers. Their frustration is manifest when they go on to argue, as one or two did this week, that the negotiations are so clearly not progressing very far that it is time for the British to start firming up in the “no deal” threat. On this line of thinking, the only way the European Union can be shifted from its “blackmail” stance is by the issuing of explicit threats to bring the whole show crashing down.

On the other hand, there are those of us who see only chaos. The UK has brought a lot of aspiration to the table, along with a kind a kind of Great British Bake Off mentality, the one that sees a lot of cake being eaten. But we get few hard proposals and even fewer details. More deeply, there is alarm expressed in many quarters that the UK is simply not very good at – or at least not terribly experienced in – the art of negotiation.

If we bend over backwards to be fair to the negotiators we must admit that difficult bargains, if they are to be struck, often first dance with failure. But there are some basic rules of negotiation that, if followed, could point to a likely successful outcome.

Ideally, the parties must have a degree of goodwill and trust. That’s not to say they must like each other: that is often too much to expect. But each side must believe that there is the possibility of a mutually beneficial settlement. A spirit of compromise is essential. Without all of this, the negotiation is essentially a surrender process: one side says to the other: “Give up or we continue fighting.”

Since the UK joined the EU the British have done little to engender goodwill or trust. Probably the reverse, actually. Just think about all the rows about money, the endless opt-outs, the countless articles about bent bananas and cucumbers. Disparagement of the EU is the British orthodoxy.

Basic negotiating errors have been made at every step of the way. Before any thought was given to tactics, strategy or even objectives, a hard deadline was set for the talks to conclude. Think about that. A deadline, involving catastrophe if it is not met, was imposed on the talks before any preparation was done.

No consideration has been given to what the other side wants to achieve: the EU has been crystal clear about its negotiating parameters and has stuck to them. But nobody in the UK seems to think any of that matters. Negotiation must involve an element of persuasion, an attempt to nudge the other side away from its established position. Where is the reasoned argument, the rational response?

In negotiation it is a good idea to be prepared to make concessions. That can create goodwill and an expectation, if not obligation, that the other side will do something similar. That’s why it was good when the UK backed down over its own timetable demands. But the agreement to stick to the EU’s negotiating timetable was quickly followed by inchoate accusations that Europe is “blackmailing” the British by sticking to its timetable.

Leadership, whether of a company or a country, can be relatively straightforward. Most of the time the skills required are ones of basic competence: a safe pair of hands.

Most of us who wonder how on Earth our bosses could ever have risen so far fail to appreciate that promotion is usually just a matter of not making mistakes and being in the right place at the right time.

True leadership skills are usually only ever needed during times of stress or crisis. And then it is often just a matter of organisational luck if we find ourselves with chief executives or prime ministers who have the necessary managerial qualities.

The UK prime minister does not possess coping skills necessary in a crisis. Nor did her predecessor. Theresa May is incompetent. Most of us have worked for bosses who believe that if only we can say enough “positive” things then the organisation will come through current turbulence.

Competence, the ability to formulate plans, pay attention to detail and make good but tough decisions are skills not really needed most of the time.

Government can be a bit like banking. The Irish banks, for instance, didn’t need exemplary, visionary or even terribly competent leaders for much of their existence.

Safe pairs of hands just lent money that for the most part stood a good chance of being paid back. But when trouble hit, the banks found they didn’t have the proper leadership or the necessary competence. And then they went bust.