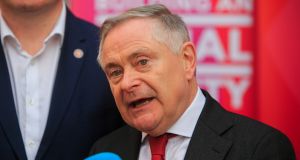 Labour Party leader Brendan Howlin said ‘we are likely to see a minimalist trade deal in goods, which will do serious harm to the Irish economy’. Photograph: Gareth Chaney/Collins.

Politicians have warned about the potential vulnerability of Ireland in future trade negotiations on the day that the UK is set to officially leave the European Union.

Speaking at the Institute of International and European Affairs on Friday morning, Labour Party leader Brendan Howlin said that despite claims from the Government that it had secured a “bullet proof” or “cast iron” settlement of Ireland’s concerns, “we are now vulnerable to the capricious and mendacious politics of Boris Johnson, who has legislated to rule out any extension to talks beyond the end of this year and who is hostile to any level playing field for rights and standards.

“At best, we are likely to see a minimalist trade deal in goods, which will do serious harm to the Irish economy.

“We may even see the UK engaging in attempts to undermine its neighbours by lowering its standards on work and environment. And a hard Brexit is still a very real possibility.”

“I think Britain will lose, I think their standing in the world has been damaged and will be diminished without the solidarity that comes with EU membership.

“The European Union for Ireland will be quite different without the UK in it. Now our focus turns to the east-west relationship in terms of getting a trade deal- and a deal on whole range of other things.

“There also will need to be deals on fisheries, on energy, on transport, on aviation, on law enforcement, on data protection.

“If we’re going to get a trade deal that doesn’t have tariffs or quotas - which is really important for Ireland - the EU is going to insist on their being a level playing field between the UK and the EU in terms of how goods are produced.

“That is about standards but it’s also about competition law, state aid rules and so on. If the UK decides that it wants to deregulate to create competitive advantage and then expects to be able to sell those products - having gained that competitive advantage - into an EU market in a way that disadvantages EU companies, there is no way that the EU is going to facilitate that.

“I think we need to be blunt about that. The truth is we’re losing a very powerful friend here, a country that has very similar views to Ireland on most things.

“Ireland’s going to have to work much harder in terms of building alliances and turning friendships into partnerships.”

Speaking on Morning Ireland, Mr Varadkar said his party is “going to take a firm line to ensure we protect our coastal communities”.

He said it is “in Ireland’s interests to allow team of Simon Coveney and Helen McEntee to continue negotiations”.