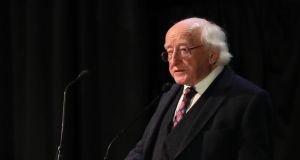 President Michael D Higgins warned that the EU must become ‘a key global actor of influence, and indeed of action’ in wider global crises or ‘it will continue to lose relevance, be perceived as weak’. Photograph: Nick Bradshaw/The Irish Times

President Michael D Higgins has urged a new “European conversation” to renew and future-proof the European Union after Britain leaves on Friday night.

Measures are needed to combat “growing alienation” from the union so that there is an alternative for those falling for far right extremism, neo-populism and abuses of nationalism, he said.

Speaking at a reception for diplomats at Áras an Uachtaráin on Thursday, the President said fears are being stoked for political advantage and he blamed austerity “enforced by unaccountable troikas, including EU institutions” for worsening the economic bust “which impacted so disastrously on Europe. ”

Austerity had “led directly to lost cohesion” and “its manifestation on the European streets”, he said.

Mr Higgins also warned that the EU must become “a key global actor of influence, and indeed of action” in wider global crises or “it will continue to lose relevance, be perceived as weak”.

Meanwhile, Fine Gael MEP Mairead McGuinness, the vice-president of the European Parliament, has predicted Nigel Farage will embark on a crusade to “kill Europe” despite Britain’s leaving the EU.

Ms McGuinness, who clashed with Mr Farage during rowdy scenes in the parliament on Wednesday, warned the Brexit Party leader will “travel far and wide” for what she believes is “now a crusade” for him to undermine the union.

Ms McGuinness told the Pat Kenny show on Newstalk she believes the parliament may have given Mr Farage too much attention.

“When you say ‘good riddance to Nigel Farage’, in a way I suppose we have allowed him become the focus of all of this – and maybe we should have played this better – insofar as not allow him to use the European Parliament as a platform to kill Europe,” she told Newstalk.

“I worry particularly at his comments [on Wednesday] where he’s not just happy that the UK is leaving, but he hates Europe and he’s an outright opponent of the whole European Union.

“The idea of allowing somebody now to continue to chip away at a very unique structure which is difficult to maintain – 27 member states, different interests but trying to work together in a world that’s fracturing – and he will be effective because he gets the airwaves.

“And I think it means that the rest of us have to work harder.”

The MEP said the EU was moving into a “much more dangerous and more difficult phase” of the Brexit negotiations.

Separately, former taoiseach John Bruton said imminent trade negotiations between Brussels and London will be “the most hazardous part of the entire Brexit process for Ireland. ”

“Every other EU country will have interests to defend. Some of these will differ from Irish interests,” he said. “Trade offs will have to be made around the EU Council table.”

Ireland could “find itself alone”, he cautioned.

“The new arrangements for Northern Ireland are complex, and many of the specific details of how they will work in practice still need to be worked out.”