Hard Brexit would be ‘unmitigated disaster’ for Irish fishing industry 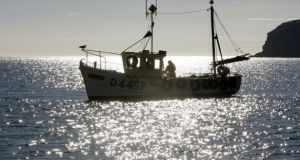 The CEO of the Killybegs Fishermen’s Organisation has warned that if there is no trade deal between the UK and the EU by the end of 2020 then there will be a hard Brexit which will be “an unmitigated disaster” for the Irish fishing industry.

Sean O’Donoghue told RTÉ radio’s Morning Ireland that it is “an unrealistic timescale” to expect a trade deal by the end of 2020.

British waters are extremely important to the Irish fishing industry, he explained. The top two species – mackerel and prawns were 60 per cent and 40 per cent, respectively, dependent on UK waters.

Overall, the Irish fishing industry is 30 per cent dependent on UK waters, he said. “If there’s a hard Brexit, after that access would be gone. The value of the industry would be significantly reduced.”

Mr O’Donoghue said that British prime minister Boris Johnson has “signed up for this” which was “a good starting point”. However, he pointed out that laying a good foundation did not mean that a house would be built.

“We need a reasonable solution, a three pronged approach that is sustainable and economically and socially sustainable.”

He said that not all stocks are being depleted, his organisation supported sustainability arguments which were needed for the future of the industry, but they also needed to operate.

Mr O’Donoghue pointed out that fish swim in shoals and if there was a restriction on one specific species it would be difficult to implement when other species are caught in the net. If one species was at “zero catch level” then all species would be shut off, he said.