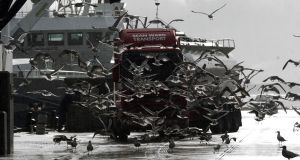 The proposed agreement on fisheries would affect Donegal particularly hard given that Killybegs depends heavily on mackerel fishing in UK waters for a large part of its business. Photograph: Brian McDaid

The Government should threaten to veto the EU-UK trade deal if Irish fishing fleets have to carry a disproportionate share of the EU catch handed back to the UK, an industry group has said.

The Killybegs Fishermen’s Organisation (KFO), which represents one of the largest parts of the fishing industry, has said the proposed fishing deal would be the “death knell” for Irish fishing.

The group is concerned that the industry is at risk of losing €44 million of the €160 million of EU fish caught in British waters that EU negotiators are offering to hand back to the UK.

The €160 million amounts to a concession of 25 per cent of fish stocks landed in UK waters to the British, but the KFO argues that the proposed fisheries deal “disproportionately hits” Irish fishing trawlers given that their catch of mackerel accounts for €31 million of the €160 million.

The KFO wants the deal rejected because it says it represents an unfair burden for the Irish. However if the deal is forced through under pressure from other sectors, then the veto should be threatened to ensure the industry is adequately compensated for taking a disproportionate share of the lost stocks.

“If this deal is going to damage us so badly, then the Government should use the veto to get the compensation from the others,” KFO chief executive Sean O’Donoghue told The Irish Times.

“If it comes to it that this is the deal that is going down, then Ireland needs to – before they sign off on this – get the other member states to stump up for the unfair burden that we are carrying.”

The proposed agreement on fisheries would affect Donegal particularly hard given that Killybegs depends heavily on mackerel fishing in UK waters for a large part of its business.

“Ireland has to say: ‘Come on here, we are not taking this burden and we are not signing off on this deal’,” said Mr O’Donoghue.

Minister for Foreign Affairs Simon Coveney has said that if the UK accepted the EU’s offer and signed off on a trade deal, the EU’s 27 member states would have to agree to burden-sharing to ensure some countries did not suffer more than others as a result of the deal on fisheries.

Mr Coveney said he would not be surprised if the standstill over an agreement on fishing collapsed the whole negotiations, with it being difficult for him to see how the EU’s main fishing nations could support further concessions being given to the UK.

The KFO pointed to the lack of fairness in the proposed agreement, noting that the UK’s share of mackerel – stocks that are spawned in seas off the west coast of Ireland – would rise to 71 per cent from 60 per cent, while Ireland’s would fall from 21 per cent to 13 per cent.

He estimated that Killybegs would lose a third of its mackerel earnings and that the port would have “to get rid of” 10 of the 23 vessels that fish for pelagic fish, such as mackerel, under the deal.

“This would be a massive blow to Donegal but it would affect Castletownbere, Dunmore East, Kilmore Quay and Clogherhead as well because there are reductions in the white fish,” he said.