Government’s Brexit plan to warn on imports and exports 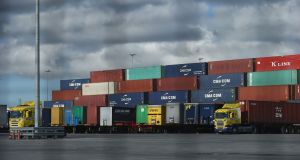 Firms are expected to face difficulty getting shipments through ports unless they have completed the correct customs procedures. Photograph: Stephen Collins/Collins

The Government’s new Brexit plan will explicitly warn businesses that anyone trading with or moving goods through the UK will face changes, no matter the outcome of EU negotiations with Britain.

The plan is scheduled to be launched this week, most likely on Wednesday, amid renewed fears at Government level over the risks to the economy from Brexit.

Firms are expected to face difficulty getting shipments through ports unless they have completed the correct customs procedures. Trying to export or import without doing so will be “like going to the airport without your passport”, a source said.

The Government is concerned about the prospect of a limited trade deal, or a crash-out Brexit, next January, as well as the prospect of firms being blindsided by the conclusion of the current transition period, at the end of this year.

The plan will also contain an update on registrations for an Economic Operators’ Registration and Identification (EORI) number, which is needed for firms doing business outside the EU. More than 67,000 firms have registered for their number, and these firms are responsible for some 96 per cent in terms of the value of export and 93 per cent of the value of imports.

Elsewhere, the Northern Ireland Affairs Committee at Westminster has launched an inquiry into the impact of Brexit on cross-border criminal activity and co-operation on policing, security and criminal justice.

Britain will lose access to more than 40 EU measures on security and judicial co-operation at the end of the post-Brexit transition period on December 31st, unless new arrangements are agreed alongside a free trade agreement. The committee’s chairman, Simon Hoare, said that criminals must not be able to find refuge in intelligence and policing blackspots caused by jurisdictions no longer speaking to each other.

“Cross-border co-operation on policing, security and criminal justice has heavily relied for years on agreements and arrangements made at the EU level. The outcome of negotiations between the UK and the EU on these issues remains uncertain. With such little time left, it is essential that we examine what will replace the European Arrest Warrant and the UK’s access to information-sharing services such as the European Criminal Records Information System from January,” he said.

“We will also consider how the different likely scenarios might affect cross-border criminal activity.”

Without a new agreement with the EU, Britain will lose access to EU databases including DNA profiles, fingerprints and vehicle registration data.

The inquiry will look at the barriers Brexit could place in the way of co-operation between authorities on both sides of the Border and what scope exists for the UK and Ireland to work together outside the EU structures.