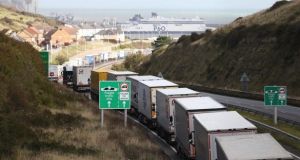 Lorries at Dover due to industrial action in Calais: ‘I think we would be naive to think that they are just going to wave Irish trucks to the front of the queue out of some kind of good will gesture,’ the Minister for Foreign Affairs said. Photograph: Gareth Fuller/PA

The Government is prepared to subsidise direct ferry routes to mainland Europe to ease the movement of goods in a post-Brexit trading environment, Minister for Foreign Affairs Simon Coveney has said.

Goods between Ireland and Europe generally move over the UK “land bridge” but its departure from the EU has made the route’s future problematic in terms of customs checks and queues at ports.

Mr Coveney has urged companies to begin testing direct sea routes from next month, anticipating some disruption along the land bridge from January.

He said Ireland is now receiving assistance from other EU member states in anticipation of delays - specifically the use of “green lane” systems that bypass customs checks for Irish origin trucks arriving in EU ports from the UK with sealed containers.

Addressing the Irish perspective on the future of EU-UK relations in an online forum organised by the PR firm Hume Brophy on Friday, Mr Coveney said the UK has also signed up to the International Transport Convention that allows for containers to remain sealed during transit through Great Britain.

He noted, however, that the greater problem would likely arise in British ports with serious congestion and delays caused by new regulatory checks.

“I think we would be naive to think that they are just going to wave Irish trucks to the front of the queue out of some kind of good will gesture, if they have been queueing for two days,” he said.

In the last year a number of direct ferry routes between Ireland and Europe have been announced, as well as additional sailings, although Mr Coveney said demand has not yet shifted from the faster UK land bridge.

“We are encouraging companies now to look at direct ferry route options. To use the month of November to perhaps test a new supply chain,” he said.

“If necessary the Irish Government will put money into subsidising ferry links if that makes sense. At the moment ferry companies tell us that it does not make sense and would actually be more disruptive than it would be helpful.”

Eugene Drennan, president of the Irish Road Haulage Association (IRHA), told The Irish Times that dedicated EU connectivity money set aside for Brexit should be channelled into funding daily ferry services for trucks.

“We need to get into Northern France, which is achievable, in 16 hours. Using the land bridge at the moment if you got a really good run you would probably get into Calais in 13 and a half hours, or a typical run would be 16 or 17 hours,” he said.

In relation to the broader ongoing discussions on the future relationship with the UK, Mr Coveney said the issue of fishing was likely to be the biggest sticking point, even though many would find that “bizarre” - the industry accounts for a small part of both economies but is highly sensitive.

“The British Government has made all sorts of promises to the fishing industry in the UK and in Scotland in particular,” Mr Coveney said.

“It’s very much linked to the sovereignty debate and a positive consequence to leaving the European Union. On the EU side it’s equally sensitive.”

The EU is seeking a status quo arrangement on access. Belgium currently catches about 60 per cent of its stock in UK territorial waters, Ireland about 35 per cent. Mr Coveney said that while progress was evident in other areas of talks, both sides remained “very far apart” on fishing.

On Tuesday, the Government will pass a budget based on the assumption of a “no trade deal” scenario with an obligation to be “cautious and pessimistic” in terms of financial planning, he said.

“I think there will be a deal but I would not be surprised if I was wrong.”