Ulysses has capacity for 1,342 cars but only about 50 present on Thursday 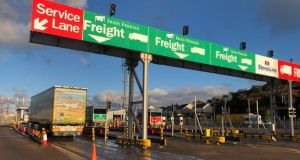 Thursday’s early morning ferry from Dublin to Holyhead, one of the last before the January 1st imposition of a European Union trade border between the island of Ireland and the United Kingdom, had a ghostly quality to it.

The Irish Ferries Ulysses has capacity for almost 2,000 passengers, together with 1,342 cars and 241 trucks. In the event, there were perhaps 50 cars, divided roughly even between Irish and UK registration plates.

Freight trailers were visible mainly by their absence. I saw just four.

The ship’s cafe was empty for almost the entirety of the crossing. In Boylan’s Restaurant, half the chairs were stacked on tables, such was the absence of demand. The freight driver’s separate eating area was closed, apparently due to lack of clientele.

In the ship’s shop, festooned with sweatshirts, tourist tat, perfumes and alcohol, the absence of customers allowed the crew member in charge to concentrate instead on stacking shelves for the expected onslaught of shoppers once January 1st has come - and duty free has returned.

A similar “calm before the storm” feeling attends the motorway standard A55 dual carriageway that leads from Holyhead, across Holy Island and slicing on through Anglesey to the Britannia Bridge over the Menai Strait.

For five miles outside the north Wales ferry terminal, the second busiest in the UK, one side of the A55 has been designated a lorry park, similar to the approach road to Dover in Kent.

EU Exit Contraflow, announces an LED sign amid the hundreds of traffic cones and dayglo finger posts that shepherd cars off the west-bound carriageway into Holyhead and onto the other side, leaving the approach road free for the thousands of trucks that may have to stop there if their papers are rejected at the Port and they are turned away from the ferries. But for now, the vast linear lorry park is completely empty — not a rejected truck in sight.

From 11pm Irish time on Thursday, December 31st, the UK formally leaves the EU Single Market and Customs Union, to be replaced by the trade agreement agreed on Christmas Eve between EU and UK negotiators, and since ratified by the British parliament.

What happens on the ground is anyone’s guess. Where once, and for as long as almost anyone can remember, there were no border checks on goods moving around the Single Market between EU Member States, now everything going in or out of the UK from the remaining Member States must comply with the terms of the new agreement.

That means importers and exporters, and those moving their products in or out of the UK, must have their paperwork in order. If it is not, the port operators have no option but to refuse a truck entry to the Port - hence the A55 holding area.

The whole thing is called Operation Cybi, named after the 6th century saint who founded a monastery on Holy Island and is the brainchild of the Welsh government and the Port authorities, not least Ian Davies of Stena Line who heads a team that in effect run the harbour.

Waiting for January 1st and all that comes thereafter, he describes himself as calm and mentions Y2K, the millennium bug it was feared would crash computers on January 1st, 2000, leading to global mayhem, but which in the event made virtually no impact at all.

If that happens this weekend, it will be due very substantially to planning and preparation.