Fishing: Why it is the first flashpoint issue in EU-UK trade talks 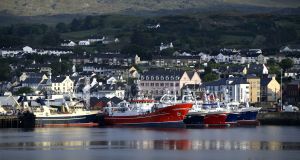 Fishing could be the biggest obstacle to a deal in the upcoming trade talks.

Michael Cavanagh stands on the quayside in Killybegs, Ireland’s largest fishing harbour. He points at a docked trawler in Co Donegal port to give a sense of how large his own fishing boat is.

The Father McKee is the Greencastle man’s 65m trawler and is out with his sons in the north Bay of Biscay off France fishing for boarfish, a small fish used to make meal for feeding salmon. Cavanagh does not fish anymore – “too many birthdays”, says the 70-year-old.

The UK’s decision to exit the European Union and the potential closing of soon-to-be British waters, on top of existing restrictions, has made life stormier onshore for Irish fishermen like Cavanagh.

“We have more challenges ashore than when we are at sea,” says Cavanagh, buffeted by blustery Donegal weather on the quayside.

Even before negotiations on a trade deal between the EU and UK start on Monday, the two sides have already clashed over fishing rights. Fishing, it is feared, could be the biggest obstacle to a deal.

Brussels has tied any post-Brexit free trade agreement to a reciprocal deal on fisheries that will allow EU boats to fish in British waters and British-caught fish to be sold in EU markets.

In stark contrast, Britain’s negotiating position, set out last week, does not include fisheries as part of any future trade deal. Instead, the UK wants to stop European fishing vessels from accessing British waters and to negotiate any access and permitted catches on an annual basis.

Even though fishing accounts for just 0.1 per cent of the UK economy, the sector has become totemic of Boris Johnson’s dogged “take back control” political agenda heading into the trade negotiations. Protecting British waters have become a visceral symbol of Johnson’s post-Brexit vision. It is not surprising; Brexit and his trade plans enjoy strong support in the UK’s depleted coastal fishing communities. However, there are practical problems to his negotiating position.

“The UK wants to take back control of their fishing. On the other hand, they will have to recognise that most fish caught in British waters is exported to the EU, so there is not a lot of point in taking control of your waters if you don’t have an export market,” said David O’Sullivan, the Irish former EU director general for trade.

Fishing will be the first flashpoint issue as both sides have set July 1st as the target date for a deal on fisheries to give time for negotiations with third countries such as Norway and Iceland in October and November to finalise quota agreements on widely distributed fishing stocks.

“That is a tall order and extremely difficult but not impossible,” says Sean O’Donoghue, chief executive of the Killybegs Fishermen’s Organisation.

The fact that migratory fish like mackerel caught by Donegal trawlers do not stop at man-made borders makes the range of potential solutions large and the negotiations highly complex.

“It is very difficult to explain to a fish that there is a border whereas you can do that to a human and a lorry driver,” Pascal Lamy, the former director general of the World Trade Organisation and a one-time EU trade commissioner, told The Irish Times.

In Donegal, Cavanagh sees the political posturing ahead of talks starting as “sabre-rattling”. However, the concern that fisheries would be cast adrift in favour of the more pressing post-Brexit arrangements facing other more lucrative and powerful industries is palpable in Killybegs. Cavanagh believes that the industry has “become the sacrificial lamb” of the negotiations.

Ireland’s fishing fleets rely heavily on fishing in UK waters to make a living and nowhere is the concern about the collapse of trade talks more keenly felt than in Killybegs.

“No trade deal is a disaster, a total disaster, because it’s vitally important for us that the link between the wider trade negotiations and the fisheries is maintained,” says Cavanagh.

“It is never going to be as good as it was, no matter what deal we get.”

Donegal fishing trawlers traditionally catch mackerel north and northeast of the Irish coast and as far east as the Shetlands, north of Scotland. When the Brexit standstill period expires at the end of the year – and if there is no deal – these waters will be out of bounds to Irish boats.

Mackerel, part of the valuable pelagic stocks landed by the large trawlers that sustains Killybegs and the Donegal fishing industry, are at their most valuable before they start migrating south and southwest towards the Irish coast where they are slimmer and their fat content declines.

This year, the fish only started reaching Irish and EU waters in the second week in February, by which time Japanese buyers have stopped purchasing stocks as the quality of the fish has declined.

Long term, being “out of British waters” could cripple the industry, says Cavanagh.

“Our income will fall, our overheads will rise because when the mackerel are north they are in large shoals. You shoot and tow on a spot of mackerel for maybe 10 minutes. Down here, they are scattered out and you spend longer towing for them,” he says.

“If you get a mixed fishery, the horse mackerel damage them, the quality is less and nobody wants to be picking through them in the factories. It is not a good product.

“It is vitally important that we get access to the UK waters.”

On average, mackerel caught in British waters makes up 60 per cent of the Irish fleet’s catch, though it can be as high as 75 per cent. The fleet is 40 per cent dependent on access to the UK waters, mostly in fishing areas west of Cornwall, for nephrops, or prawns. For these species, the economic value of UK waters to the Irish fleet is 60 per cent. For all species, it is 29 per cent.

O’Donoghue of the Killybegs Fishermen’s Organisation said that loss of access to British waters would be “unmitigated disaster” for the Irish industry. The value of the industry would be halved to €600 million, he estimates, and between 30 and 40 per cent of the 14,500 people employed in coastal communities around the country would lose their jobs.

The fallout would not stop there as Irish, British, Dutch and French naval vessels could be forced to manage fishermen unwilling to recognise an “artificial line at sea” if there is no deal. He expects “clashes at sea” not unlike the “scallop war” between French and British boats in 2018.

“There will be chaos on the high seas between the different countries. People are not going to accept that they are out of waters that they have fished in for generations. There will be flashpoints and port blockades – it is inevitable,” he said.

A short walk from the quay, Sean Óg Ward’s fish processing factory is quiet for now. He is expecting another catch of fish in two days. At peak, he employs 105 people from August to April processing mackerel, horse mackerel, herring, sprat and blue whiting. He has 30 employees for the rest of the year. Last season, up to 90 per cent of his mackerel came from British waters, he says.

He fears that in the event of no trade deal boats will not be able to catch mackerel until February when it could run into the start of the blue whiting season, reducing the size and value of both catches to the Donegal fishing industry.

“If we don’t get the fish out of UK waters, we are in trouble. The whole industry is in trouble. We need stability. We can’t invest in the company. We don’t know what will happen,” says the Donegal man whose business turned over €60 million last year.

The fishing industry in Donegal is also concerned about what will happen to the waters off the Irish west coast if EU fishing fleets, displaced from British waters, arrive in these fishing grounds.

“It is already a crowded area without putting everybody into it. It would have a crazy effect on stocks and stability and supplies and business models. It just wouldn’t work and it would be disaster for the Irish, a complete disaster,” says Ward.

Standing in a passing rain shower on Killybegs pier, Cavanagh hopes – following the age-old negotiating principle that nothing is agreed until everything is agreed – that fisheries can be kept on the negotiating table for the duration of the talks to extract the most leverage for the industry.

“It is like the little boy on a toilet: nothing’s finished until the paperwork is done,” he says.