First day of sailings between Rosslare and Dunkirk booked out 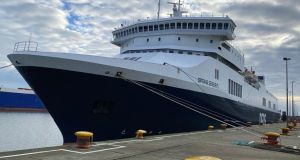 The first day of sailings on the new direct ferry service by shipping operator DFDS between Rosslare and Dunkirk in France are fully booked, the company has said.

The shipping company will begin the new route on Saturday to offer a sea bypass around Britain and new EU-UK border checks put in place after Brexit took effect on Thursday night.

Fears about delays from the new customs and agricultural checks at ports have encouraged importers, exporters and transport firms to use the new direct service to mainland Europe.

DFDS is launching the new six-times weekly direct service from Rosslare Europort to Dunkirk in northern France as an alternative to the British landbridge route.

The voyage time will be 24 hours, which is longer than the normal journey time on the landbridge, though post-Brexit checks raise the prospects of delays at British ports on that route.

Aidan Coffey, route director of DFDS, said the two ships leaving Rosslare on Saturday, at 2pm and 11pm, were fully booked, as is the 10pm sailing from Dunkirk on the same day.

Mr Coffey said there were about 120 freight units on each sailing with a mix of both driver-accompanied trucks and unaccompanied trailers including refrigerated and ambient units.

The DFDS ships are already in place, the MS Visby in Dunkirk and Kerry and Optima Seaways in Rosslare, and have carried out berthing exercises in recent days in the Wexford port.

The first direct sailing to mainland Europe by shipping operator Stena Line after Brexit came into effect at 11pm on Thursday is also fully booked.

The Stena Horizon sailing on Saturday will carry more than 50 driver-accompanied lorries along with between 40 and 50 unaccompanied trailers on the sailing from Rosslare to Cherbourg.

Arrivals into Dunkirk will put Irish hauliers into the key road network on continental Europe within a three-hour drive of Paris and 20 minutes of the French-Belgian border and onward access to important economic markets for Irish traders in the Netherlands and Germany.

The certainty of a set time schedule on the direct ferries make them more appealing to transport companies concerned about the impact of new border checks, particularly in the wake of France’s travel ban on road freight before Christmas in response to the coronavirus strain in the UK.

“It takes the problems of the UK landbridge out of EU transport for us. We have a definite timeline to Europe,” said David McArdle of Dublin-based firm DG McArdle International.

Minister for Foreign Affairs Simon Coveney urged businesses before Christmas to use direct ferries to and from mainland Europe “for the foreseeable future” for the “certainty” of avoiding traffic logjams at British ports as a result of the post-Brexit border checks and inspections.