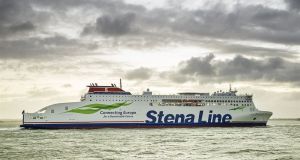 Stena Line said its ferry the Estrid will operate the new weekend service from Dublin to Cherbourg. Photograph: Stena Line

Two new ferry services direct from Ireland to continental Europe are set to start next week in response to a sharp increase in demand from hauliers for additional capacity bypassing the UK following Brexit.

Brittany Ferries said from Monday it would begin a new weekly crossing connecting Cherbourg with Rosslare, initially served by the vessel, Cap Finistère.

Stena Line said it would start a new weekend sailing from Dublin to Cherbourg.

Stena Line said it was trialling this route and trying to reorganise its sailings to “meet demand”.

The switch will result in a reduction in weekend capacity on the Dublin-Holyhead route, where demand has fallen sharply due to Brexit.

Stena Line said last week it was also moving a larger, new ship to a direct Ireland-France route from a planned route between Britain and Northern Ireland as more businesses seek to avoid Brexit checks.

The shipping company has added the Stena Embla to the Rosslare-Cherbourg to this route to meet increased demand from firms avoiding Irish Sea ports and border controls.

The ship was originally planned to operate on the Belfast-Liverpool route but new post-Brexit border controls, customs and regulatory on goods being moved between Britain and the island of Ireland has forced businesses to rely more heavily on direct services between Ireland and France.

Increased bureaucracy around customs and regulatory checks has forced Irish companies to avoid the British “landbridge” route, traditionally the fastest and cheapest way to and from mainland Europe, and to look to transport goods on the direct ferries with mainland Europe.

The number of ferry services running between Rosslare, the closest port to mainland Europe, and the continent has more than quadrupled on last year to meet the post-Brexit demand.

Paul Grant, Stena Line’s Irish Sea trade director told RTÉ Radio One’s The Business show that the operator’s freight volumes between Ireland and the UK are down 60 per cent so far this year.

He said freight volumes into Dublin and Rosslare were down and that some hauliers were finding it easier to come in via Northern Ireland.

“From a haulier perspective they just want to get back to moving their goods as efficiently as they possibly can to their destination.”

And while the falloff in trade on the Irish Sea routes is a concern, Mr Grant said he expected that it would eventually recover.