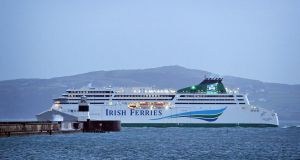 Businesses will continue to rely on the “faster, cheaper” UK landbridge for imports and exports despite Brexit, Eamon Rothwell, chief executive of the company that operates Irish Ferries, has claimed.

Goods going to or from Britain need new paperwork and face extra customs checks following the UK’s departure from the EU on December 31st, a move that will also see duty free shopping return.

Speaking after the first post-Brexit ship docked in Dublin on New Year’s Eve, Mr Rothwell predicted that businesses will continue to send goods to the continent via the landbridge across Britain despite the extra red tape and checks.

“The landbridge is here to stay,” he said.

Around 11 per cent of the 2.77 million 40ft shipping containers that move in and out of Ireland every year cross Britain on their way to or from the continent.

Mr Rothwell argued that this route is cheaper, faster, has more frequent services, is less prone to cancellations than direct services, and will continue to offer hauliers the flexibility to pick up goods in Britain, all of which mean that businesses will favour it.

“And we’re saying that having invested €150 million in direct services to the continent,” Mr Rothwell added.

Irish Continental Group, owner of Irish Ferries, is responsible for about 25 per cent of the roll-on roll-off traffic in and out of the country.

Its chief executive pointed out that while the debate has focused recently on the landbridge versus the direct services to the continent, 80 per cent of this traffic is Irish-British trade.

Of the rest, 11 per cent comes or goes via the land bridge, while direct traffic to the continent amounts to 9 per cent.

Mr Rothwell explained that a vessel can sail four times across the Irish Sea in a day, while it can make only one trip to the continent, so a direct service cuts its capacity by 75 per cent.

Similarly, as the sea journeys at either side of the landbridge are shorter, they tend to be less prone to cancellations because of bad weather.

However, the shipping company boss believes there will be issues over the coming weeks as businesses adjust to the new regime.

He also noted that trade will be quiet at the start of January, as a lot of goods were shipped ahead of the end of the year in anticipation of Brexit.

Systems are already in place for handling traffic with non-EU countries, and these will evolve for British trade over coming months, Mr Rothwell believes.

“We need to focus more on the 80 per cent of traffic that is moving between the Republic of Ireland and the UK to ensure that this traffic continues to run smoothly and is not clogged up in the short term by overzealous application of new rule books for trading with the UK,” he said.

Once passengers return as the Covid-19 crisis recedes, they will be able to buy cut price alcohol, tobacco and other goods as duty free trade will reopen.

Irish Continental Group invested in duty free facilities on its vessels in 2019 in expectation of this. Under the new rules, those travelling to Britain from EU countries, including the Republic, get larger allowances than those travelling the other way.

Mr Rothwell confirmed that passenger numbers last year fell 65 per cent as Covid-19 travel restrictions hit that element of Irish Continental Group’s business. Those who did travel with the company included many essential workers, he noted.