EU will not be ‘provoked’ into ending UK talks, Barnier says 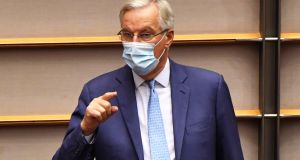 The European Union will continue negotiations with Britain and resist being “provoked” by a move by the London government to reverse prior agreements, chief negotiator Michel Barnier has told a meeting of member state ambassadors in Brussels.

Ambassadors described the British government’s introduction of a bill that would override parts of the withdrawal agreement made last year as a conscious breach of a prior deal and of international law that had damaged trust.

The feeling at the meeting was that the bloc “should not be provoked, and should continue calmly with negotiations,” an EU diplomat said.

However, “in the end, for some ambassadors it was not conceivable to sign another agreement, if they just ripped up the last one,” the diplomat added.

“The message from Barnier and the member states was to keep calm and carry on, and there was a strong focus on the need not to react to a provocation by the UK side,” a separate EU diplomatic source said.

The EU may take legal action against the UK the internal markets bill proposed by the government continues its passage into law and is not changed to remove aspects that override the prior deal.

Under the withdrawal agreement agreed last year, disputes between the two sides can be resolved by an independent arbitration panel, which can impose fines or refer the issue to the Court of Justice of the European Union.

The EU has given Britain until September 30th to alter the internal markets bill, and last week said it would “not be shy” in taking legal action.

Some ambassadors were said to have reacted angrily to developments in London, particularly to a claim by prime minister Boris Johnson that the EU was trying to impose a food “blockade” on Northern Ireland, describing this as “spin”.

The dispute revolves around the prospect of the EU listing Britain as an approved non-EU source of food of animal origin, which is needed in order for goods to be sold from Britain into the EU.

The EU side believes that the listing should not be a problem, The Irish Times understands, but is insisting that London set out its planned changes to food regulations first, as the British side has indicated they will make changes after January 1st without specifying what they will be.

The row spilled out onto social media earlier this week, with Mr Barnier insisting that the EU “is not refusing to list” the UK, and his UK counterpart David Frost retorting that the UK’s food standards rules on January 1st are “perfectly clear” as they will be EU rules, and that the EU would be notified of any changes “with plenty of lead time”.