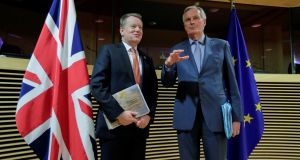 The European Union released a draft of its hoped-for future relationship deal with Britain on Wednesday, setting out ambitions for a tight relationship on trade and security.

The 440-page document crosses several of Britain’s red lines, spelling out the bloc’s ambitions for Britain to agree “uniform implementation” of state subsidy rules, with the European Court of Justice remaining the adjudicating authority.

“The Parties recognise that the establishment of conditions that ensure a level playing field between the Parties is necessary for trade and investment between the Union and the United Kingdom, ” the draft reads.

The EU’s draft envisages reciprocal access to waters for fishing rights, with negotiations held each year by December 10th on fishing opportunities for the following year, another contentious point.

The UK negotiating team said it had also sent a draft to the EU. This includes a free trade agreement with annexes, as well as agreements on aviation safety and air transport, and a civil nuclear agreement.

“We are sharing ours in confidence as a negotiating document, as part of the ongoing negotiating process,” a government spokesman said.

“Teams will now analyse each other’s texts and we expect further conversations between the teams next week.

“We will keep under review which documents it is appropriate to publish during the course of negotiations and whether it is useful to make them availablle more widely.”

Though Britain has left the EU it is is currently in a transition period, continuing to adhere to prior norms pending the agreement of a deal on the future relationship. If none can be agreed, it will automatically begin trading on World Trade Organisation terms from January 1st, 2021, with potentially severe effects on the Irish economy.

The government of prime minister Boris Johnson has until July to request an extension to the transition period, but has insisted it will not do so even as the Coronavirus pandemic delayed talks this week.

Both sides said they were examining options such as using video conferencing in place of face-to face talks.

“The negotiations can still proceed given all of the logistical arrangements that have been put in place,” British foreign secretary Dominic Raab said on Tuesday.

“We’re confident that we can get this done and, actually, I don’t think delaying Brexit negotiations would give anyone the certainty on either side of the Channel that they need.”