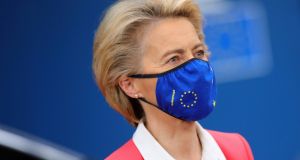 The European Union has appealed to the British government to come to a compromise on state aid rules to break the deadlock in Brexit talks and allow the negotiations to move into a crucial final stage before time runs out.

UK prime minister Boris Johnson is to speak to European Commission president Ursula von der Leyen on Saturday in a video call to assess the prospect of a deal, with just weeks remaining to clinch an agreement and prevent deep economic disruption on January 1st.

The UK has been pushing for Brussels to agree to enter the intensive “tunnel” phase of talks in which negotiators close down communications to the outside world to try to pin down a compromise, something taken as a sign that London is keen to reach a deal.

However, EU leaders frankly state that the British side has not yet moved sufficiently to indicate where a compromise could be possible, and that the ball lies in Westminster’s court.

The European Commission on Wednesday launched infringement proceedings against the UK for introducing its Internal Market Bill, which would unpick aspects of the withdrawal agreement reached last year and was seen as a breach of good faith.

German chancellor Angela Merkel described the Bill as a “setback” and a “very bitter moment”, but added that the UK had the opportunity now to move talks forward if it was prepared to compromise.

“We are in a constructive mood. A lot will be determined by what Britain wants, and what Britain does not want; it is up to Britain to decide this freely,” Dr Merkel said.

“I cannot tell you there has been a breakthrough. It will be a crucial phase over the next few days.”

Dr von der Leyen described the call with Mr Johnson as a stock-taking exercise and called on the UK to “step up” to confront the main issues of contention, which have centred on how to ensure fair competition between companies, allocate fishing rights, and what system of recourse could resolve potential disputes.

“Mainly the topic of level playing field: how can we make sure that it exists between both economies, and the question of fisheries are very difficult so we will see how we progress on that,” Dr von der Leyen said.

Dutch prime minister Mark Rutte said he remained “cautiously optimistic” that a deal could be found, while Taoiseach Micheál Martin cautioned that he doubted that a breakthrough was imminent.

“While there is a mood to engage, no one is underestimating the task that lies ahead,” Mr Martin said.

“I think it’s highly unlikely that there will be any deal by the 15th of October ... It’s fair to say that’s not the time frame,” Mr Martin said. “By the end of this month, the beginning of November, there would have to be some clear pathway to an agreement.”

EU member states have insisted that a deal cannot be reached if the Internal Market Bill goes ahead with controversial articles that breach international law by over-riding aspects of the withdrawal agreement related to checks between Northern Ireland and Britain, which were agreed to avoid a hard border in Ireland.

Mr Martin addressed the European Council to outline Ireland’s position, and explained that it was essential both that the withdrawal agreement was implemented and a deal be reached, as the 27 leaders met in Brussels to discuss foreign policy and the economic fallout of the coronavirus pandemic.

“Part of the discussion this morning in relation to Covid was the continuing negative impact of Covid-19 on our economic performance of Europe, ” Mr Martin said. “The last thing we all collectively need now is another hit to the economy occasioned by a no-deal Brexit.”